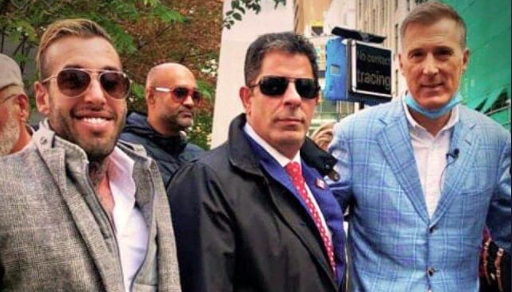 Former member of parliament and founder of the far-right People’s Party of Canada, Maxime Bernier was at the latest anti-mask, anti-lockdown protest in Toronto, joining a collection of groups that have organized protests and actions throughout Canada over the past weeks.

On Saturday, October 3, Bernier appeared at Dundas Square in downtown Toronto, when crowds of people gathered at the square for the second week in a row to protest the public safety measures they see as oppressive and unwarranted during the spread of COVID-19.

Bernier was on site offering his opinion that the “second wave” of the pandemic is actually “more socialism.”

His appearance in Toronto was not surprising, as iPolitics reports that the party leader has been eyeing upcoming byelections in the Toronto Centre or York Centre ridings. Despite running a candidate in almost every riding across the country, the PPC failed to secure a single seat during the last election. Even the incumbent Bernier was ousted from his position as MP for Beauce, Quebec.

Since the beginning of the PPC, the party and its leader have been battling questions related to policies on immigration and their proximity to movements and people who spread hate in Canada.

Bernier has often claimed that questioning immigration policy in Canada comes with the label of a xenophobe, saying last year that his party cares about shared “values, culture, and identity” that will create a “prosperous and harmonious society ... with well-integrated immigrants.”

However, according to his speech notes, in a section completely dedicated to defending western values, he leads an attack on what he has dubbed “Islamism,” and blames multiculturalism for increasing tensions across Europe.

“Among the threats to our values and way of life is political Islam, or Islamism, the fastest-growing and most dangerous radical ideology in the world today, which is responsible for so much violence in so many countries,” he said. “There is growing evidence that Islamists are pushing their agenda here in Canada, with the support of money from the Middle East.”

Help us continue to fight against hate in this country: antihate.ca/donate

At the rally, Bernier drew the attention of many. Not wearing a mask over his face while giving interviews, the leader did have one tucked under his chin throughout. A sharp contrast to many of the attendees who believe that the masks are another measure of control enacted by the government. 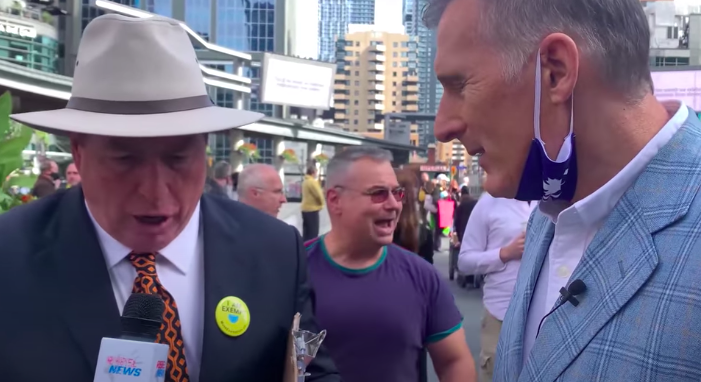 Anti-lockdown rallies across the country have become more than people gathering to object to the government’s handling of the pandemic. The events are planned by a collection of organizations that promote a series of intersecting conspiracy theories, many related to issues like vaccinations and other nefarious government plots that include figures like Bill Gates, George Soros, and Justin Trudeau. There are many QAnon conspiracy believers inside Canada's anti-mask movement.

Chris Saccoccia, one of the most vocal spokesmen for Mothers Against Distancing (MAD), pointed to Bernier’s presence, along with Republican Party of Canada candidate Rob Carbone, as a sign that people were beginning to pay attention to the movement. Saccoccia did not respond to a request for comment.

“This is all a red herring to try and lull you into submission,” Saccoccia said during the latest rally. “It’s not working and it won’t work. How do you know we’re making headway, how do you know they’re running scared. I don’t know if you know this, but you saw Maxime Bernier walking around. We’re attracting leaders of political parties.”

Despite his current status as a political pariah, Bernier was once thought to be the favourite for leadership of the Conservative Party of Canada. He started the PPC only after losing the leadership race in the final round by less than one per cent to Andrew Scheer. During this time Bernier was more of a traditionally conservative libertarian, his platform has grown openly xenophobic since he left the CPC.