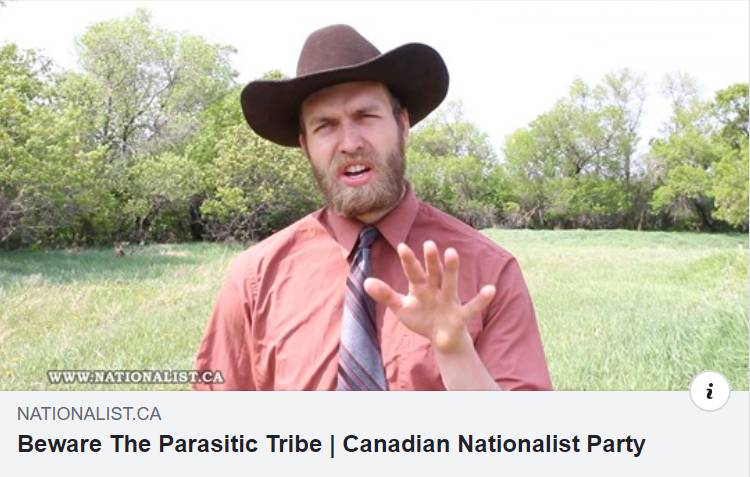 The Canadian Anti-Hate Network will publish the names of 250 members of the neo-Nazi Canadian Nationalist Party if they are successful in becoming a registered political party.

The Canadian Nationalist Party is a neo-Nazi party led by Travis Patron, who recently released an anti-Jewish video about the “parasitic tribe” that calls for Jews to be “removed once and for all” from Canada. Another post on their Facebook page promises they have the cure to Jews. They are also explicitly anti-LGBTQ+ and anti-Muslim.

We filed a criminal complaint, and Travis Patron is currently under RCMP investigation.

There is no mechanism for Elections Canada to prevent a neo-Nazi party from becoming a registered party, and they expect that Patron will be successful in registering his party before the next federal election.

Patron is required to submit over 250 party membership declarations; each individual is then contacted by Elections Canada to confirm their membership.

The Canadian Anti-Hate Network has learned that information on these 250 members will become part of a public record. We plan to publish these names and their cities of residence as soon as they become public, and will encourage local media to run stories naming neo-Nazi supporters in their communities.

This kind of naming and shaming is part of our mandate of exposing hate groups to make sure communities are well-informed, and to ensure that there are significant, nonviolent social consequences for supporting hate groups.

If any of members of the Canadian Nationalist Party want to avoid being named and facing the social consequences of supporting a neo-Nazi party, they can email Elections Canada at info@elections.ca to withdraw their support.

If you want to support our mission to monitor, expose, and counter hate groups, please visit antihate.ca/donate. Thank you!