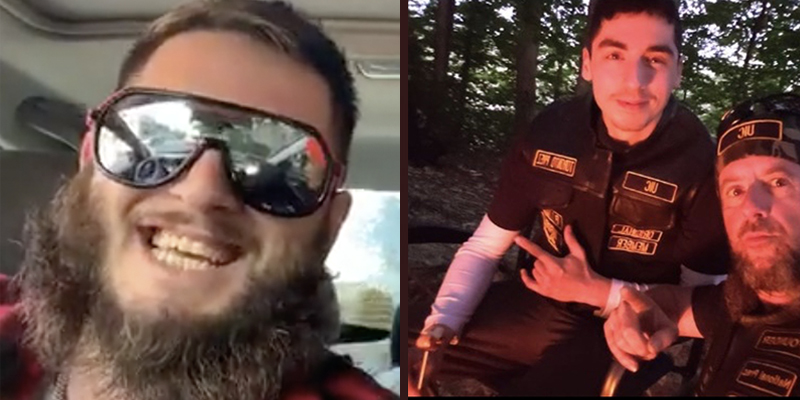 The Urban Infidels Canada have returned violent Youtube troll Jordan Justein to the leadership of its Toronto chapter, after he suffered a major falling out with other prominent figures in the Greater Toronto Area's hate movement.

A private group chat containing a variety of different current and former members of known hate groups paints a picture of how Justein’s temper has been bringing him into conflict with Chris Vanderweide, former Kitchener chapter president of the Urban Infidels.

Vanderweide became infamous for attacking people with a helmet alongside anti-LGBTQ+ hate preachers at a pride event in Hamilton, Ontario. “The height of violence occurred with one of the Agitators, who was wearing paramilitary gear, wildly swinging a helmet and striking one of the Pride Defenders in the face,” said an independent review of the incident.

Help us expose the inner workings of hate groups in Canada: antihate.ca/donate.

Despite claiming to have carried out other assaults while he was facing charges, and ongoing threatening talk, the crown offered Vanderweide a plea deal and he is currently serving a suspended sentence for assault with a weapon.

His probation seems not to concern Vanderweide as he continues to threaten anti-fascists, has started openly attending demonstrations again, and has painted himself a new helmet. He has also continued his tough talk with Justein, who is Jewish, over his lack of condemnation of “evil jews."

According to the chat, Justein has been charged for an alleged assault of another member of the group in a Toronto Tim Hortons. Footage of the incident posted to the chat shows Justein accusing Josh Chernofsky of being an 'Antifa' spy, and refusing to leave the establishment when asked by security. In the video, Chernofsky tells security that Justein punched him in the face.

Employees in the video report calling the police and a spokesperson from the Toronto Police Service confirmed to the Canadian Anti-Hate Network that Justein was arrested for assault and will appear in court in December.

Vanderweide’s reaction to the footage was to call out Justein as the “reason the left calls us unhinged,” and repeatedly berate him for his alleged dual loyalties between Judaism and Canada.

“Why does [Justein] protect evil Jews who destroy our country and people,” he wrote, adding soon after, “that’s what this movement is. Keeping our country’s Christian values.

“Jews would be exterminated if it wasn’t for Christians.”

Included in the diatribe was a call for Canadian Anti-Hate Network executives Bernie Farber and Evan Balgord to be shot.

Vanderweide seemingly won the argument as Justein was later expelled from the chat. 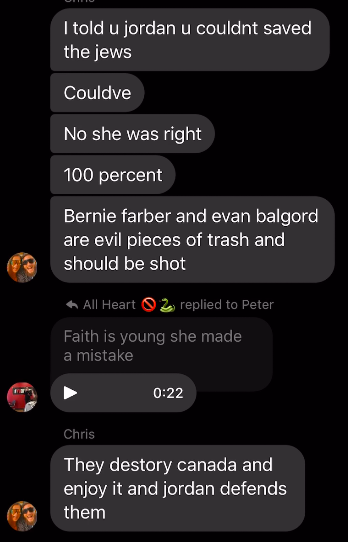 According to Edmonton Against Fascism, shortly after, Urban Infidels Canada president and founder “Heathen” Steven Lane revealed that Justein had seen his membership in the organisation restored as he stepped back into the role of president of the group’s Toronto chapter.

“Jordan is president of [the] Toronto chapter UIC, and we're going to work on building the other chapter that have been interested in Guelph, Chatham, and London,” Lane reportedly wrote online.

Justein’s style of activist trolling has included a series of YouTube videos “Jew Goes Undercover at Antifa - Black Lives Matter Protest Toronto,” and “Muslims form blockade around a Jew and Toronto Police arrest the Jew,” during the latter of which he was filmed walking around a protest wearing a helmet and his Urban Infidels jacket. Protesters formed a circle around him, linking hands to try and limit his movements.

In the video, after forcing himself through their line, he was handcuffed by police.

Justein was also involved in a fight in the Eaton Centre after an anti-immigration rally by the anti-Muslim group PEGIDA last year.

The Urban Infidels Canada are one of the many offshoots of the Soldiers of Odin. Like their founding organisation, the UIC continues to display anti-immigration and specifically anti-Muslim sentiments.

Most recently, the UIC president went to Red Deer with other members and supports of hate groups that attacked a weekly anti-racism rally.