Ontario president says they aren't a hate group while Alberta Sgt. at Arms says “The LGBTQ community will not be finished until they can f*** children.” 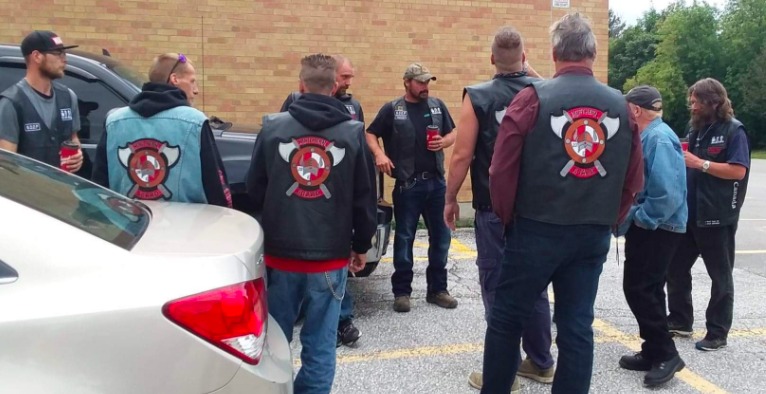 A group of about 20 individuals gathered in Collingwood, Ontario under the banner of “MAPP” or “Mankind Against Pedophiles and Predators,” earlier this month.

Like other right-wing anti-pedophilia movements before them, discussion in the MAPP group regularly slides into homophobia and transphobia and blames the LGBTQ+ community for pedophilia.

A great deal of the group’s bigotry towards the 2SLGBTQIA+ community specifically addresses the recent increase in visibility of gender-diverse and gender-exploring children.

Northern Guard Facebook group moderator and QAnon follower ​​​​​​​Steve Gutsche contributed a 250-word homophobic conspiratorial diatribe, which included the statement: “We know that LGBTQP has nothing to do with sexuality...it is meant as an attack on the family unit. Especially against the traditional male role model as protector. Instead, they are trying to create a 'global citizen' which is a feminized version of the male, passive, non-violent and willing to obey authority like a good little communist” and made reference to adrenochrome, the antisemitic QAnon conspiracy theory.

LGBTQP -- not a typo -- is Gutsche adding "pedophile" to the end of the acronym.

MAPP rally co-organizer Carmen Greco, who goes by "Carmen Joseph" shared an article titled "'It's really sick and dark': The left says PEDOPHILIA is a sexual orientation, should be protected under LGBT laws."

Others are more explicitly hateful. Scott Gorkoff, who identifies himself on his Facebook profile as the Sergeant At Arms of the Northern Guard Alberta Chapter, writes: “The LGBTQ community will not be finished until they can fuck children.”

In an interview with Collingwood Today, Reason denied that the Northern Guard is bigoted or a hate group.

We don't let hate groups whitewash their image. Help us hold them accountable using their own words: antihate.ca/donate

In the Mankind Against Pedophiles and Predators Facebook group, one member shared their frustration with “having to defend the LGBTQ community against this group."

The responses are telling. Andras Katona, whose profile picture features a sonnenrad or black sun, a symbol used by neo-Nazis in place of a swastika, replied with a widely debunked meme that suggests that the 2SLGBTQIA+ community accepts adult-child sexual relationships under the banner “love is love.”

When the original poster called it a false narrative, he responded by threatening: “if any of these degenerates come near my children I mean any of them. Well I'll leave it at that.”

Former Proud Boy, Son of Odin, and Soldier of Odin Timothy Reid Gavin “MacPhreedom” added that the perception linking the LGBTQ+ community and pedophilia is one "you’ve brought on yourselves.” He also says that the homophobic sentiments being expressed in the group “are a direct result in the alphabet [LGBTQ+] community not only turning a blind eye to, but yes, also endorsing and encouraging” behaviour that is predatory to children.

Reid has been a fixture on the Southern Ontario hate scene for several years, including attending multiple events in Hamilton, such as the racist “Patriot March” and Yellow Vest protests at Hamilton City Hall. He was also detained for assaulting an antifascist at a PEGIDA anti-muslim protest in Toronto in 2018.

The individual defending the LGBTQ+ community tagged Robbie Reason, founder of the group, for help. Reason told her “I don't see every comment. You'll have to show me,” and promised to “go through the comments,” asking for patience.

A week later, Katona’s debunked meme and threat was intact on the thread.

On a different post in the group alleging that “the left is normalizing pedophilia”, Katona commented “Look closely at who the people ars [sic] pushing this narrative! Open your eyes folks they are all the same. 👃”

The nose emoji is used by white supremacists to represent Jewish people.

MAPP announced its next demonstration will be in London, Ontario, in October.

Facebook shut its page down shortly before publishing this piece. Of course, they already have a new private group.