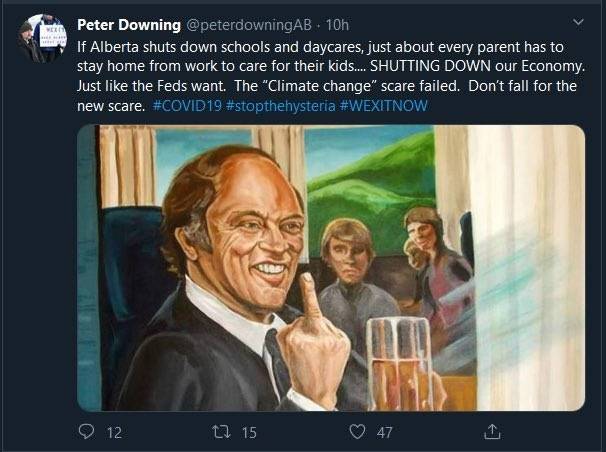 Source: Twitter. March 16, 2020. The artwork in this image is by Jenn Kovachik, and it was used by Peter Downing without her consent.

The far-right in Canada have been spreading misinformation about the coronavirus since day one. To them, COVID-19 is clear evidence of a massive and sinister conspiracy – they just don’t agree on which conspiracy or conspiracies are to blame.

Importantly, many commenters are expressing a desire for the virus to kill groups they feel are deserving, particularly Chinese and indigenous persons.

“Fucking subhumans. They deserve the plague."

“I’ll go get carona [sic] virus or Ebola and I’ll make sure I come to a bunch of reserves and touch everything ;) . . . Your species will die out and then my hard work tax money can go towards better things than your free pay cheque.”

Some believe COVID-19 is a hoax.

Nick Gallant, founder and leader of the Northern Guard (a splinter group of the Soldiers of Odin), says, because the media hasn’t provided any names of victims and he doesn't know of anybody who’s sick, information regarding the virus isn’t “validated.” This falls apart when one of his friends says she personally knows someone who has the virus.

Today, Peter Downing, head of the western separatist project Wexit Alberta tweeted:” If Alberta shuts down schools and daycares, just about every parents has to stay home from work to care for their kids…. SHUTTING DOWN our Economy. Just like the Feds want. The “Climate change” scare failed. Don’t fall for the new scare.”

Joey Deluca of Calgary who runs the Worldwide Coalition Against Islam says either the virus or its severity is being made up by Democrats as “part of their evil plan to take the White House and the Senate in November.”

The idea that the virus is an anti-Trump ploy could be found on several Canadian far-right social media platforms and Facebook groups. Here, the conspiracy is that COVID-19 is an effort by the “deep state” to undermine Trump who, because of his anti-immigrant and Islamophobic rhetoric, is widely admired by the Canadian far-right.

Other groups acknowledge that the virus both exists and is a health hazard. Their conspiracies run darker.

Many are linking COVID-19 to the conspiracy theory that the United Nations has a plan to eliminate as much as 90% of the world’s population. George Soros makes an appearance in these conspiracies, having become the ubiquitous boogeyman for the far-right. Among the groups pushing this theory is a Facebook group for supporters of the III%ers, an anti-Muslim and anti-government militia.

Some believe the coronavirus is the precursor to forced vaccinations which many members believe are a method of mind control, sterilization, or simply an effort to kill them outright as part of their shared delusion that the UN is trying to eliminate them.

The antivaxxers say they will never take any future COVID-19 vaccine.

A comment on a Northern Guard page says it’s part of a plot to make people “complacent, obedient, and easily subdued,” leading to mandatory vaccinations, which they call “medical totalitarianism.”

Then there is the belief that COVID-19 is in fact a weapon created by China to attack people of European descent. One of the individuals pushing this narrative is Brad Salzberg, the leader of the Cultural Action Party, a fringe but officially recognized political party in BC. He is further claiming that the Canadian government is pushing for the immigration of infected non-white and Muslim immigrants to wipe out “old stock” (read: white) Canadians.

There are even more outlandish theories – that the virus is designed to purposely target the elderly since they are more inclined to be conservative, for example – but they have too many theories to discuss each in detail.

Few of them, however, are very original; they are variations of the same conspiracies that you’d hear on shortwave radio back in the 1990s. What’s different right now is that coronavirus itself is real and on everybody’s mind. People are scared and vulnerable. The far-right are taking advantage.