A timeline of far-right events during COVID-19

They are refusing to stay at home, instead taking to the streets with conspiracy theories 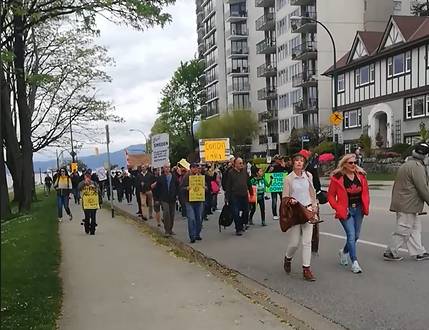 Members and supporters of Canada’s hate groups stopped holding street-level demonstrations in the aftermath of the COVID-19 outbreak, instead spending all their time spreading conspiracy theories about the virus online. Some, like the Proud Boys, ID Canada, Atalante Quebec, and the Hundred Handers began putting up stickers and posters blaming immigrants, refugees, and multiculturalism for the spread of the virus.

Some vloggers and far-right activists have been filming hospital parking lots. Many smaller communities aren’t dealing with a large number of cases, elective procedures aren’t taking place, and visitors aren’t allowed. In their minds, however, empty parking lots are evidence that COVID-19 is a hoax.

There has been a shift in the past two weeks. Now, many far-right activists in Canada are ignoring social distancing and holding demonstrations because they want the lockdown to end. Many believe that the virus was engineered, or at least pushed along by China, the UN, or Jews and that it’s less deadly than reported. All the conspiracies agree on one point, however: that COVID-19 is being used as a pretext for more government control, taking away rights, and forcing a vaccine on the population.

Some want to emulate the traffic-jam demonstrations in the United States that have blocked hospital entrances. In Michigan and other states, thousands of far-right demonstrators descended on state capitols to demand that COVID-19 safety measures be lifted.

As usual, Canada’s far-right can't organize the same numbers. Nevertheless, with many of them swearing not to take a future vaccine, spreading misinformation, and encouraging others to ignore social distancing, they are a public health menace.

Here's what they've been doing:

The BC chapter leader of Northern Guard claims a “snitch” called the police about a demonstration they are planning, which doesn’t come to fruition. President Nick Gallant promises to find the snitch. Several comments contain threats.

Anti-LGBTQ+ street preacher Artur Pawlowski was warned on March 23 for holding gatherings at Olympic Plaza and fined on April 3rd. Rebel Media is now fundraising off the incident.

Yellow Vests in Hamilton continue their small weekly demonstrations (and have been filming hospitals).

Continuing their tiny, almost-weekly demonstrations, a handful of Yellow Vests stand on a street corner with signs claiming COVID-19 is a hoax.

A smaller number of people went to a similar rally in Vernon, BC, describing COVID-19 as a hoax.

A small number of Yellow Vesters have an anti-lockdown protest.

Neo-Nazi Brian Ruhe claims to be a co-organizer and thanks the police for “blocking traffic [and] giving us VIP treatment.” Attendees yell at passers-by calling them Chicoms (a slur for Chinese Communist), traitors, and libtards. Somewhere between a dozen and twenty people attend.

Travis Patron, leader of the neo-Nazi Canadian Nationalist Party, advertised a demonstration, but seemingly Patron and a cameraperson are the only people who attend. Patron throws up what he claims is a 'Roman salute', but what most people would more likely recognize as a 'Nazi salute', in front of a war memorial.

"Holding up signs with messages like 'End the Shutdown' and 'I Got Bills,' about six people gathered at Walker Road and Ottawa Street to show their disagreement with ongoing restrictions meant to prevent the spread of COVID-19."

Intending to block the bridge, demonstrators on Saturday were dispersed and escorted from Montreal to Quebec City by police, according to reporting by Xavier Camus.

About 200 individuals, including but not primarily members and supporters of hate groups, protested against the lockdown at Queens Park.

The third anti-lockdown demonstration brought out about 50 people who received very negative attention from people in their apartments and passers-by. Neo-Nazi Brian Ruhe was happy to learn that the new Vancouver by-laws don’t allow for them to be ticketed.

The demonstration organized by a 9/11 truther was promoted by neo-Nazis Brian Ruhe and Paul Fromm.

For more on Vancouver far-right organizing during COVID-19, see: https://anti-racistcanada.blogspot.com/2020/04/far-right-organizing-in-vancouver.html

An earlier version of this article incorrectly stated that Dan Dicks has been banned from YouTube. He remains on the platform. However, one of his longer video on one of the anti-lockdown rallies was removed, presumably as part of YouTube's crackdown on COVID-19 conspiracies. We apologize for the error.

Do you know of an event that we missed? Send us a message with the details/sources at info@antihate.ca.