The Humanity Project has helped thousands, but the not-for-profit’s founder's connections to Northern Guard, an anti-Muslim hate group, is raising some questions. 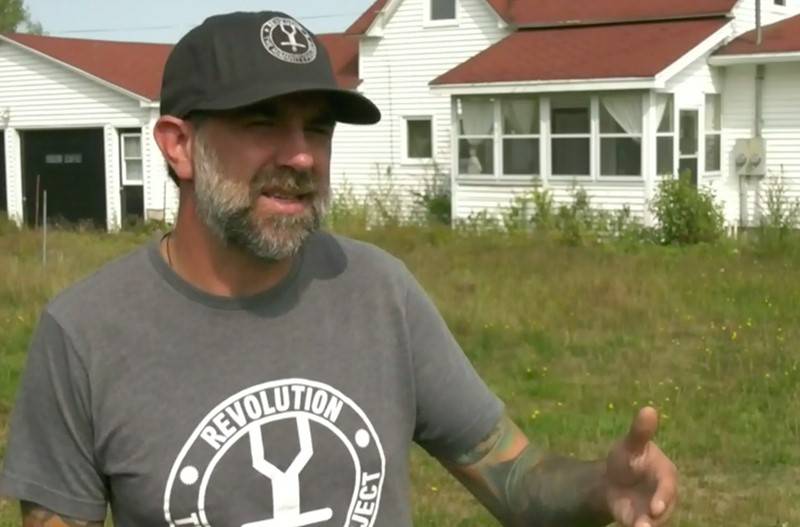 Charles Burrell heads up The Humanity Project, a registered not-for-profit that has fed, clothed, and helped hundreds of thousands of homeless, seniors, and working poor in Moncton, New Brunswick. He is also a member of a private Facebook group for supporters of the Northern Guard, an anti-Muslim hate group with chapters and members across Canada.

Burrell began the organization in 2014, where he put together survival packs for those who were facing a harsh winter without a roof over their head, according to a video testimonial about the project. Since then, the group has delivered meals, clothes, and more to many of the less fortunate, typically relying on goodwill and donations from businesses and members of the community.

Most recently, the organization purchased a farm in Little River, New Brunswick, with money from anonymous donors, to provide greater care for those in need of counselling and support. Ambitious in the scale of the project, the final plan includes tiny homes to give residents a “place to live with dignity and respect, and a little bit of privacy,” Burrell told Global News, saying the land would become a working farm for people to get their lives on track.

Nick Gallant, the former president of the Soldiers of Odin for New Brunswick and Northern Guard founder took to posting about The Humanity Project, throwing the support of his organization behind the creation of the farm.

“Northern Guard Canada will be sponsoring, fundraising, and volunteering our time to help Charlie make this happen,” Gallant wrote on Facebook, sharing a link to a news piece about the farm. “Great cause and great project and beyond glad to be a part of it.“

Help us expose concerning links between hate groups and the community: antihate.ca/donate

Northern Guard was one of many splinter groups that came as much of the Soldiers of Odin fragmented away from their violent neo-Nazi founder in Finland. In Canada, many groups kept the name, while others, like Northern Guard, formed into new cadres with very similar aesthetics and leadership.

Burrell has been a member of the organization’s private national Facebook group since 2017. While not confirmed as a patch wearing adherent, the duration of his time with the group means Burrell has been around for many of their public controversies. He is not just a member of the page, but an active participant. Burrell and Northern Guard’s leadership have reshared images and posts from The Humanity Project on the private national membership page.

Northern Guard has repeatedly denied allegations that they are an anti-immigrant group or a hate group, however, former member George Fagan explained to the Halifax Examiner the recruitment techniques and tactics used to obscure Northern Guard’s deeper motivations and attitudes towards immigrants:

“When certain things happen, like that Mosque, when that white supremacist [Alexandre Bissonnette] went in there and killed all those people, they were pleased with that,” Fagan said.

Besides Gallant saying on a podcast that Northern Guard would be “pushing that white nationalism;” repeated dives into the group’s private pages and chats have revealed members openly discussing and supporting violence against the Muslim community.

“The first [mosque] that that lands in New Brunswick, burn it,” a member named Matt Pickett wrote in comments, as first reported by Anti-Racist Canada.

"We/I tried that,” a profile with the name Davey West responded. “I burnt one down years ago. They built it again and it was bigger.”

2020-09-17 update: Burrell did not respond to our original request for comment, but has since posted the below statement on Facebook. He claims not to have known the group is racist, but defends its president Nick Gallant:

"People really do believe anything eh.
I have been friends with Nick [Gallant] since we were little kids. The only group I am affiliated with is The Humanity Project.
Lots of different groups share our post and donate to us. You cannot control who shares a post from a public page. I am on tons of other Facebook pages including a flat earth page but that does not mean I think the earth is flat. Doesn’t always mean I agree or disagree with the page or the people on it.
As for nick, I have never known him to be racist at all. At our center we serve muslims, indigenous people, asians and anyone else that comes to our building for help with Love, Dignity and Respect. Show me one hateful or racist post on our page from in last 6 years or show me one racist thing I liked on their page(Northern Guard)...I didn't even know that group was racist. I guess those post don't pop up on my newsfeed...
You reaching at nothing...#FakeNews
Funny that when you try and do something good for the community people with nothing better to do start making up bullshit.
. . . you are going to hear from our lawyer. I just made a public statement about your #FakeNews."