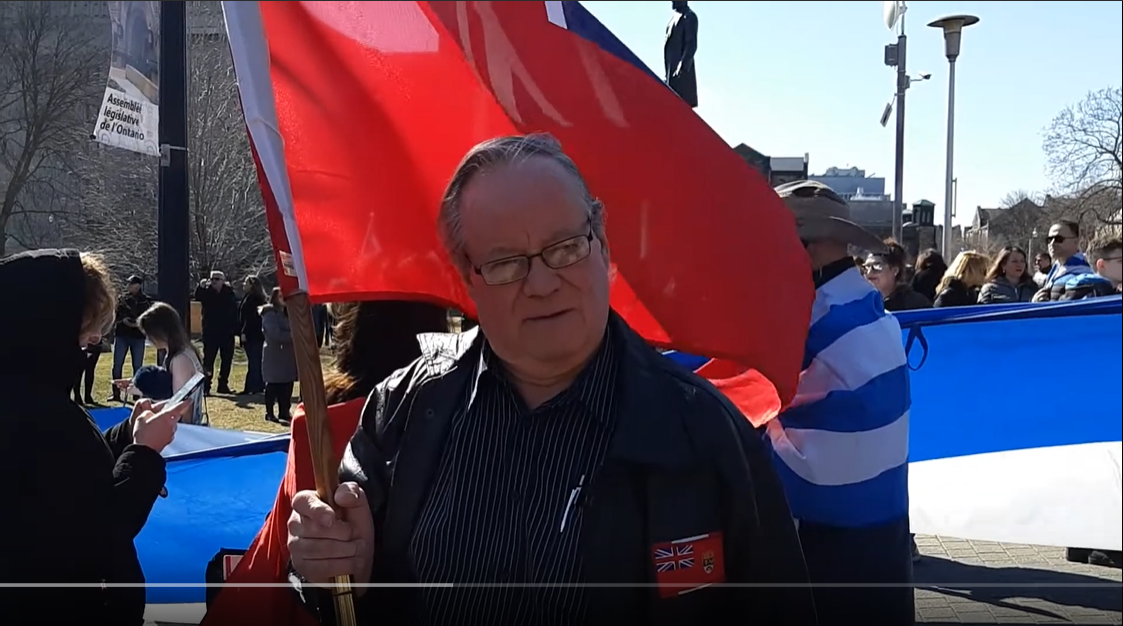 Paul Fromm at the March 08, 2020 #IStandWithGreece Rally in Toronto

Paul Fromm: A notorious and very longstanding neo-Nazi networker who has associated with and/or spoken at events for proscribed terrorist group Blood and Honour, the Aryan Guard, the KKK and David Duke, the Heritage Front, Holocaust denier Ernst Zündel, and many others.

‘Lily’ from Hamilton: A neo-Nazi Canadian Nationalist Party supporter who says she wants Coronavirus to kill more Chinese and was one of the leading figures directing harassment to the Al-Soufi family, leading to death threats and the temporary closing of their Toronto restaurant. Lily is primarily associated with the remnants of the anti-Muslim Yellow Vests Canada movement.

Gus Stefanis: A former candidate of the neo-Nazi Canadian Nationalist Party which has called for Jews to be “removed once and for all” from Canada and whose leader is charged with attacking two women in Regina

Ronny Cameron: A vlogger who came onto the scene originally as a moderate (by comparison) organizer in Toronto’s anti-Muslim scene who argued that they should limit the overt racism to be more effective. Cameron then started associating with alt-right neo-Nazis. He arrived to one of his own rallies with a group of them in October 2017, one of whom was carrying a black sun flag, which is perhaps the most popular neo-Nazi symbol today behind the swastika. Cameron has since gone full white supremacist.

Why were they there?

The March 8th event at Queen's Park was organized by the Toronto chapter of the American Hellenic Educational Progressive Association. It was billed as a rally to pressure the Canadian government to condemn Turkey for what they say is a coordinated effort to pressure “Greece’s eastern land and sea borders with the purposeful round up and transport of thousands of people seeking entry into Greece and, ultimately, the rest of Europe under the guise of being refugees, migrants and asylum seekers.”

In a Facebook post, Paul Fromm says “White Christian Europe is being destroyed.” Earlier in the week Gus Stefanis liked comments on his wall about using live ammunition and opening fire on the migrants.

Ronny Cameron says his goal is to “convince way more centrist, civic nationalist types that don’t think that race matters, that only care about the illegal migrants – my goal on Facebook is to convince you guys to be more like me.”

Fromm, Lily, Stefanis, Cameron attended with another half dozen of their ilk, some of them carrying Red Ensign flags, a flag which pre-dates the maple leaf and has been used by Canadian neo-Nazi groups for decades before becoming a symbol for Canada’s alt-right neo-Nazi groups and the far-right more generally. Several of them made videos.

Ronny Cameron took advantage of an open megaphone and spoke to the crowd. He says Greece is “acting as a shield . . . for the entire continent.” Fromm gets Cameron’s email.

Cameron then approaches attendees. Some didn’t want to talk with him, or pushed back against his blanket anti-migration message. He found a couple others, however, who were receptive and he namedrops Richard Spencer and talks about others who he calls “entry points or gateway drugs: Rebel Media, Stefan Molyneux, Gavin McInnes; and eventually they push you towards Red Ice TV, Richard Spencer, etc.” The two men he’s speaking with nod along and namedrop other white supremacists.

“We got some properly woke, redpilled individuals here,” says Cameron. “Based,” the baby-boomer-aged one says in response. The other one – in his 20s – of the two catches Cameron before the rally to get the name of his (demonetized) Youtube channel.

If you want to support our work, please visit antihate.ca/donate. Thank you!