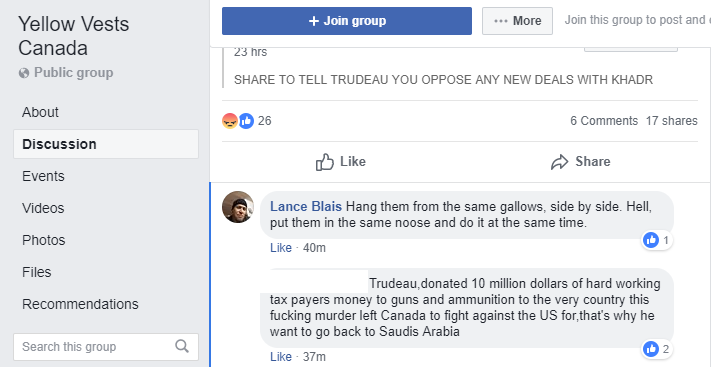 The Public Safety report acknowledges right-wing extremism is a concern, perhaps more so than any other report to date. However, it characterizes the threat as one to “the fabric of Canadian society” rather than a threat to national security.

The report incorrectly states that individuals with extreme right-wing views are not openly promoting violence. The Canadian Anti-Hate Network (CAN) and others have documented hate groups in Canada issuing calls to violence, death threats, and celebrating violence towards targeted groups on a near-daily basis.

"The federal government is missing a big piece of the puzzle in its efforts to capture the threats to our collective and individual sense of safety and well-being," says Evan Balgord, Executive Director of CAN, "and we believe that's because our security services and law enforcement haven't invested sufficient resources to monitor the threat."

For example, in 2016 on the now-defunct neo-Nazi forum Iron March, a leader in Blood and Honour connected with a high school student on Vancouver Island. Blood and Honour is an old-school neo-Nazi group in Canada responsible for criminality and assaults. Now it interacts with the alt-right neo-Nazi movement on forums. The high school student posted that he was frustrated with 'leftists' at his school. Another user told him to get his firearms license. The Blood and Honour organizer told him “If you really want to stop the leftists at your school you’re going to have to use more than just arguments, but at least it’ll be a permanent solution.” Thankfully, that didn’t happen.

Today, CAN has documented death threats towards Prime Minister Justin Trudeau and Omar Khadr on the Yellow Vests Canada Facebook page, as well as threats to beat anti-fascists with a baseball bat and another comment from an individual who says he will break people's legs. Yellow Vests Canada draws its inspiration from the yellow vests movement and riots in France. In Canada it is heavily integrated with the far-right movement and right-wing extremism.

The leader of the III%ers, an anti-Muslim militia, has posted that “the only good Muslim is a dead Muslim.” Several other threats from anti-Muslim groups are well documented.

This past month, representatives of the RCMP have gone on record to say that the Soldiers of Odin aren’t a threat - despite clear indications that they are, including a report from the Canada Border Services Agency, which states the SOO are “not afraid to use violence to achieve objectives.” Another spokesperson told a reporter that they don’t know who or what the Proud Boys are. It's important to also note that CSIS had previously closed its desk on right-wing extremism and only reopened it after the Quebec mosque shooting.

"We need a renewed focus on right-wing extremism, especially since it is responsible for more than 16 murders in 18 months* in Canada," says Bernie M. Farber, board member with CAN and a long-time advocate against hate activity.

*In January 2017, Alexandre Bissonnette killed 6 in the Quebec mosque shooting. In April 2018, Alek Minassian used a van to kill 10 in Toronto.