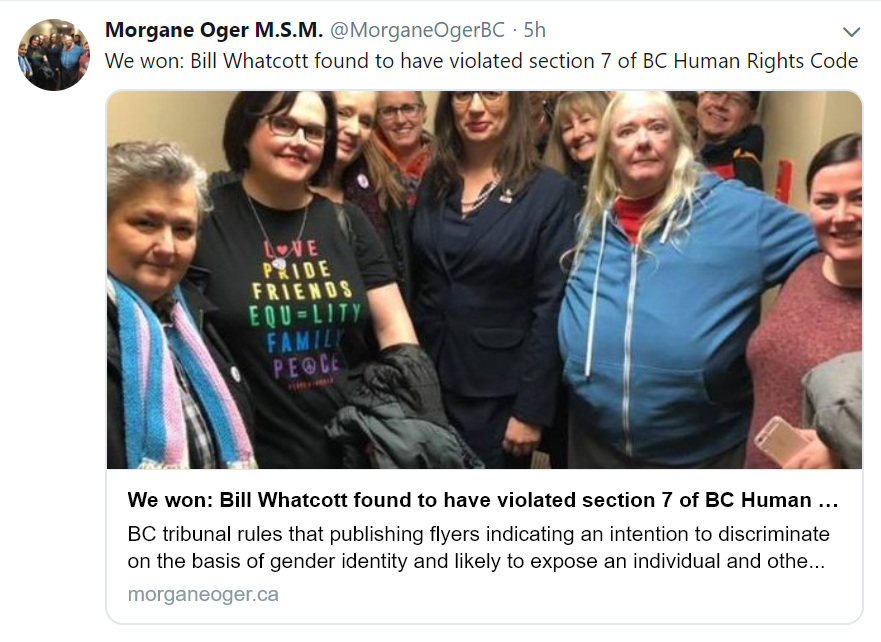 On March 27, the British Columbia Human Rights Tribunal ruled that notorious homophobe Bill Whatcott’s anti-trans flyers targeting Morgane Oger were a discriminatory publication likely to expose a person or a group or class of persons to hatred or contempt. The Tribunal has ordered Whatcott to pay Oger a total of $55,000.

Oger ran as the NDP Candidate in Vancouver – False Creek in 2017. During her campaign Whatcott distributed 1500 copies of an anti-LGBTQ+ flyer referring to Morgane as a “transvestite” in the riding and published it online. She lost the election by 400 votes.

Whatcott is well known for his anti-LGBTQ+ screeds and is no stranger to courtrooms. In 2013 he was the subject of a Supreme Court of Canada (SCC) case as the result of flyers, one of which was titled “Keep Homosexuality out of Saskatoon’s Public Schools!”. This resulted in the SCC upholding Canada’s hate speech laws as constitutional. In June of 2018 Whatcott was charged by the Toronto Police Service for infiltrating the Toronto Pride Parade under a fake name in 2016 to hand out ‘anti-sodomy’ pamphlets.

Neo-Nazi Paul Fromm came to Whatcott’s defence as an intervenor in the case under the auspices of his organization, the Canadian Association for Free Expression (CAFE). The Tribunal writes: “the intervention was not helpful and at times constituted an unwelcome and inflammatory distraction.” Further, “CAFE’s comments about Ms. Oger are completely improper and could fairly be the subject of a costs award if made by a party.” CAFE has been recognized as an intervenor in several cases.

Oger’s lawyer Susanna Allevato Quail tells the Toronto Star that the ruling in Oger’s favour sets a legal precedent that it’s not “a legitimate subject of public debate whether or not it’s OK to be transgender or whether transgender people are real.”

While this is a victory for human rights in Canada, not every province has this legislation; legal fees are expensive; and even if the wronged party wins and is awarded restitution and/or costs, they may never recover enough money from the people that wronged them to cover their legal expenses.

Bringing back Section 13 (s. 13) of the Canadian Human Rights Act is one solution which is currently being considered by the House of Commons Justice Committee.

S. 13 made it possible for any Canadian to make a complaint to the Canadian Human Rights Commission regarding individuals or groups communicating hate online. If the CHRC found the complaint to be reasonable, it would go to the Canadian Human Rights Tribunal, a semi-judicial body which could order a cease and desist and a small fine. If the individual refused to stop, they would be in contempt of court and may face jail time.

Canadian Anti-Hate Member board member Richard Warman researched, filed, and litigated 16 successful complaints against online hate and the individuals and groups responsible under s. 13, resulting in a generation of hatemongers being forced offline.

This legal tool to address the spread of hatred was found constitutional by the Supreme Court, but removed by the Conservative government nonetheless in 2013. There are relatively few tools to address unrepentant hate propagandists in its absence.

The Canadian Anti-Hate Network supports bringing back s. 13, but notes that it will only be a successful tool if the CHRC and Tribunal are sufficiently resourced.