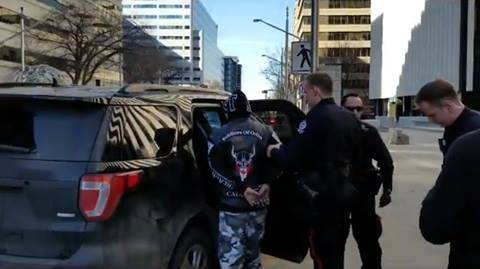 On April 22nd, the Soldiers of Odin (SOO) held an Easter dinner at the Grande Prairie branch of the Royal Canadian Legion in Alberta. A CBC story revealed that some SOO members are also members of the Legion. In an interview with the CBC, the Grande Prairie legion’s branch manager and past vice-president defended the event and the SOO, respectively.

In response, the Royal Canadian Legion is introducing new policy against “any form of association” with hate groups like the Soldiers of Odin. In social media posts, the RCL also promise they “will be investigating the issue further with the Grande Prairie Legion Branch to determine what corrective action must be taken.”

The Soldiers of Odin are an anti-Muslim hate group founded by a self-identifying neo-Nazi in Finland who has been found guilty of racially motivated assault. The first generation of SOO chapters in Canada were led by and included overt white supremacists and neo-Nazis. Since then the SOO has fractured into several groups, including the Sons of Odin, Wolves of Odin, Storm Alliance, and Northern Guard.

The Grande Prairie Soldiers of Odin leader, Wade Reimer, tells CBC that their reputation as a hate group is “unearned.”

Less than a month earlier, Edmonton Soldiers of Odin and other hate groups attended a Worldwide Coalition Against Islam rally. At the event, one speaker shared the 14 words, an infamous neo-Nazi slogan, to cheers from the crowd. Afterwards, they engaged in a premeditated attack on anti-racist and anti-fascist activists that was caught on video. One SOO member was arrested.