Since the beginning, COVID-19 conspiracy protests have welcomed anybody who will march with them. Conspiracy buffs, Instagram ‘life coaches,’ QAnon cultists, the who’s who of Canada’s hate movements and neo-Nazis have all been rubbing shoulders. While theories of Chinese virus experiments and globalist government control feature most prominently at these events, one new member of the scene in Ontario -- who has been interviewed by Rebel Media -- openly promotes pro-terrorism neo-Nazi content across his various social media accounts.

Mike Bolton of Ontario, and what appears to be members of his extended family, are public supporters of The Line, a COVID-19 conspiracy group that is partly responsible for the frequent anti-mask/anti-lockdown protests.

Statements made by Bolton on his public Facebook page, as well as several accounts we have managed to link to him on other platforms, show images praising not only German National Socialism, but also its modern and explicitly violent American and European offshoots. 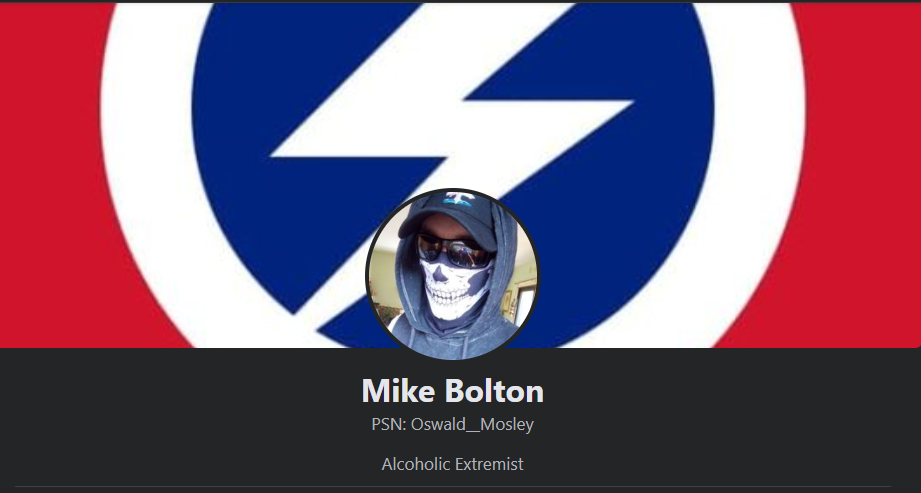 His Facebook profile contains the red, white, and blue symbol of the British Union of Fascists as the cover photo, along with a bio naming the fascist group’s leader, Oswald Mosley. The half skull mask he’s wearing is part of the unofficial uniform associated with Iron March legacy terrorist groups like Atomwaffen Division and The Base.

He captioned the photo, “the only mask I’ll wear.”

Also included on the account are the words “Citation Needed,” pictured hanging above the entrance to a Nazi concentration camp – alluding to Holocaust denial – as well as posts supporting “The Day of the Rake” -- a Canadian parody of the “Day of the Rope.” The phrase comes from the infamous neo-Nazi book The Turner Diaries, which inspired the Oklahoma Bombing, and refers to the fictional day after the neo-Nazis win that they hang journalists, politicians, and white race traitors.

Bolton’s LinkedIn resume shows experience as a labourer and machinist, and he allegedly runs a home business making wood carvings called Mike’s Wood. On his LinkedIn profile, he calls himself a designer and includes two quotes from artists Salvador Dali and Ai Weiwei.

These same quotes appear on Bolton’s Minds profile. Minds is an alternative to mainstream social networks that pays its users that draw high engagement in cryptocurrency. While pages can be reported, the site does not monitor user content, resulting in growing popularity with the fringe extreme right.

Under the name “The Canadian Atomwaffen,” Bolton has posted a series of short blog posts he has written on various issues and a large amount of pro-Nazi propaganda. In another post he defines himself as “a gamer, a designer, a labourer, but mostly as a man of God,” further echoing the description written in his LinkedIn profile. The Minds page also is not the only place that Bolton has expressed his support for AWD. In a now deleted photo on his Facebook page, he posted the symbol of the terror network, flanked with the caption “Atomwaffen - Northern Order,” a reference to a small contingent of Canadian accelerationists that united under the banner.

Other confirmed members of Northern Order include Dark Foreigner, as reported by Vice News, and Dakov, as recently revealed by the SPLC’s Sounds Like Hate podcast. 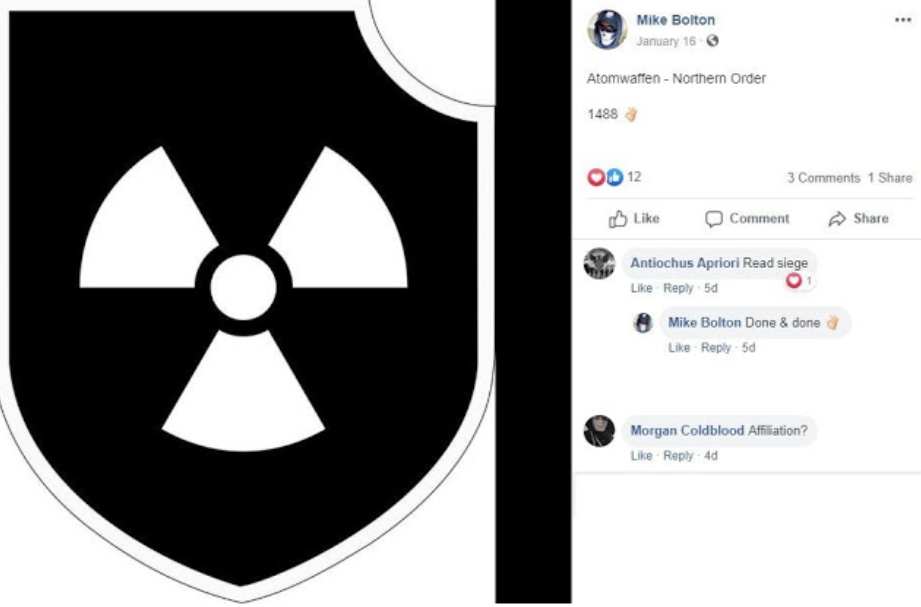 Besides the memes and blog posts, the Minds profile also includes a hashtag Bolton claims has repeatedly gotten him banned from social media platforms – in a 2019 post to Minds, he claimed that over 25 accounts had been taken off Facebook alone. The tag #THE, for “Thank Hitler Everyday,” is an attempt to turn even the word “the” into a hate symbol.

This same push of #THE is echoed on a Facebook alt-account of Bolton’s under the name Nichols Franćis. While the profile picture is of Unabomber Ted Kaczynski, Bolton complained that the account had received a suspension for, as he described it, “standing with Armenia over the roach filled Turkey.” 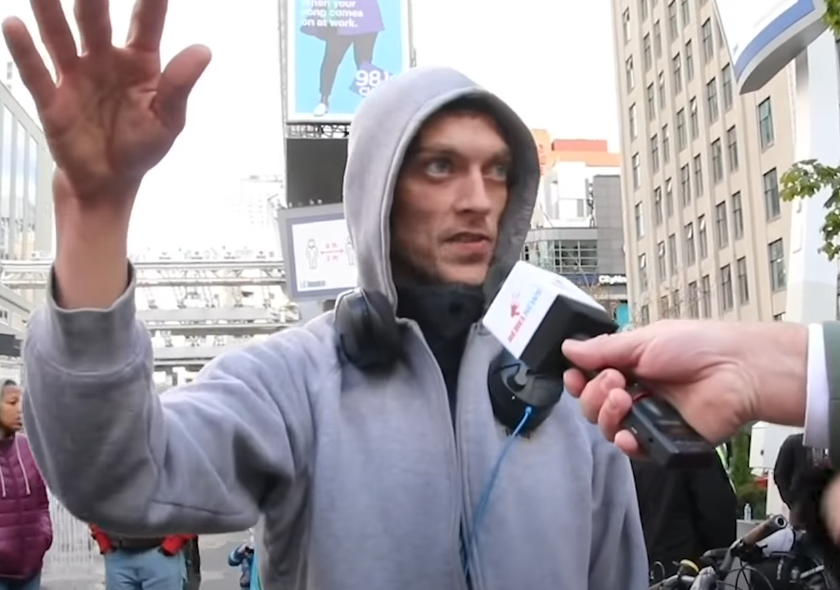 It appears as though the arrival of the coronavirus is what brought him, and several family members, to in-person events. He recently gave a short interview during a Toronto protest with Rebel News’ David Menzies, saying former Toronto mayor Rob Ford would have “been out here with us, saying no lockdowns, fighting everything Trudeau had to say.”

Bolton has categorized his support for neo-Nazi terrorism and hate content targeting Black, Asian, and LBGTQ+ persons, "race traitors," and Jews as fighting against the "tightening of the noose around freedom of speech and expression."

“DAB for Israel,” he wrote on a picture of Israel being engulfed in the mushroom cloud. “Destroy, All, Bodies.”

His apparent beliefs set a high watermark for extreme content and while in many cases disturbing, many people close to Bolton -- including some who share the last name -- appear to share posts of a similar violent tone. On a post in which Bolton was tagged about a gun sale, someone suggested the caliber is too small for large game.

“I was thinking more along the lines of Antifa govt forces and the ilk,” an apparent family member wrote.

Another person close to Bolton shared a picture on Halloween of a vehicle with a body attached to the front. Written on the back in white capital letters was the word “ANTIFA.”

His foray into the anti-masker protests does not appear to be the first time Bolton has attempted to glom onto another popular anti-authoritarian movement. In spring of 2019, he shared a post saying the world needs “drastic protest and not just picket signs and chants,” and adding that people should, “Follow in the footsteps of the Killdozer. Follow the footsteps of the Yellow Vests.” 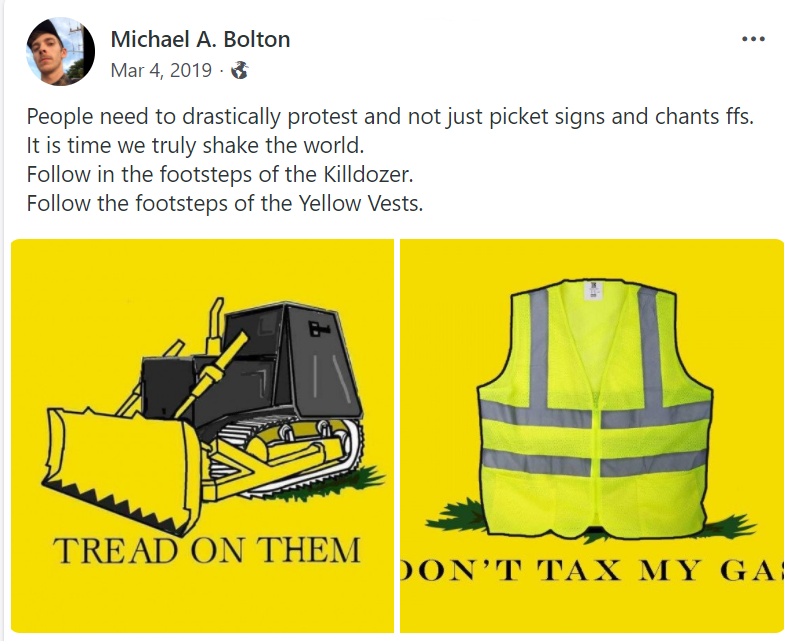 While the Yellow Vests in Canada was initially a movement inspired by France’s Gilets Jaunes protests against gas hikes, our national iteration was quickly co-opted by hate spreaders. On the largest YVC social media pages, used to organize the United We Roll convoy to Ottawa, permitted conspiracy theories, anti-Muslim posting, and more overtly racist content to remain unchallenged and unmoderated while claiming publicly racism did not have a place in the movement.

Support for the Yellow Vests is much less troubling than the reference to the “Killdozer,” the nickname given to an armour-plated bulldozer built and driven by Marvin Heemeyer. A welder by trade, Heemeyer used the vehicle to rampage through a small Colorado town in a bid for revenge against the local government. No one except Heemeyer died during the incident -- he took his own life when the bulldozer got stuck in rubble -- but it was not for a lack of trying. The homemade tank was equipped with gun ports that he used to fire blindly at police who tried to stop him and the buildings he smashed included the house of a former mayor that had slighted him, and the offices of a newspaper that had written an editorial about him.

The Canadian Anti-Hate Network reached out to Bolton through several of his social media accounts, but he has declined to give comment.