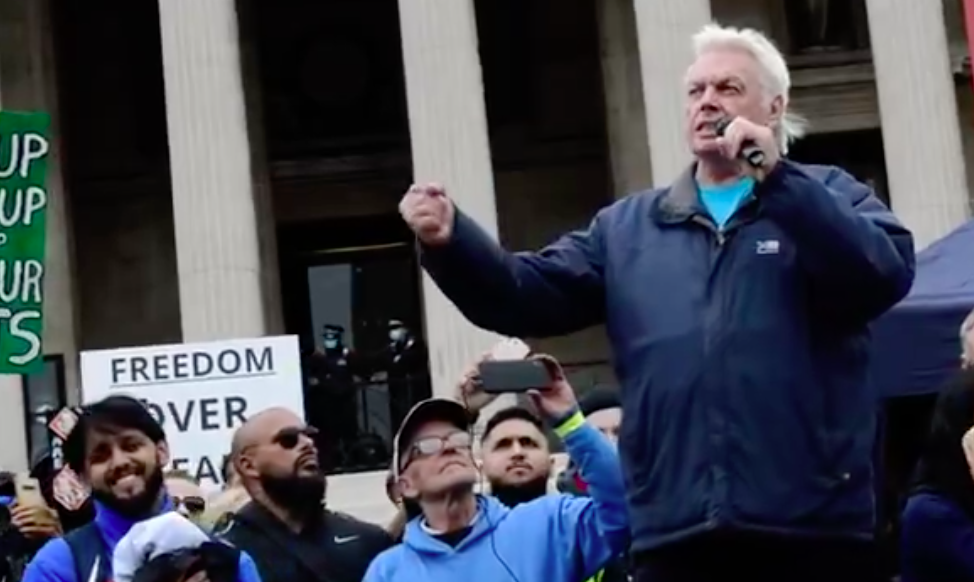 This weekend a cadre of different organizations will descend on Vancouver for what organizers are calling the BC Freedom Mega Rally 2020. The frequent anti-lockdown/anti-mask protests have become a flashpoint for a variety of racist conspiracy theories.

On October 17 and 18, Vancouver, British Columbia will host another one of a series of events that have become a staple during the pandemic. Organizers have arranged for people as far as Saskatchewan to be brought in aboard a “convoy” for the event.

Among those appearing is David Icke, a one-time British football player known for his promulgation of the theory that most major world leaders are a race of reptilian and pedophilic aliens. Icke is also a decades-long superspreader of antisemitic conspiracy and misinformation -- he claims that “Rothschild Zionists” control the world, that Jews financially supported Hitler during the Second World War, and that Jews were behind both the 9/11 terror attack and the 2008 recession. Icke has also argued that schools should permit the study of Holocaust denial.

It has been argued that Icke’s conspiracy theories surrounding lizard people and the Illuminati are, in themselves, coded antisemitic dog whistles.

“'Far Right' group, Combat 18, is a front for the sinister Anti-Defamation League, the United States arm of the 'Israeli'/Rothschild secret service, Mossad,” Icke wrote in his book The Truth Will Set You Free.

Combat 18 is the security division of the violent neo-Nazi group Blood and Honour. Both were declared terrorist organizations by the Canadian government in 2019.

Recently, Icke was banned from YouTube after promoting the idea that COVID-19 was actually caused by 5G technology.

He has been making the rounds on Canada’s patriot and conspiracy circuit, calling in from the UK to a variety of streaming programs, offering his unique take on the current situation. Chiefly that masks are hurting us, wearing them is making your will weaker, and everyone needs to stop immediately.

Icke and other foreign speakers will not be appearing in person.

We are tracking how hate operates across this country, help support this work: antihate.ca/donate

“Due to border restrictions, these powerful international speakers are not able to be physically present, but they have graciously offered to deliver their speeches virtually,” one organizer wrote in the description of a crowdfunding site. “We greatly need your funding help (approx $9,000), just to hire the technicians and rent the expensive audio/visual equipment necessary to live-stream these key speeches and make this event possible.”

At time of writing, the event had raised over $10,000, and the campaign remains active several days past the date of the rally. The description does note that any extra funds will go towards the Action4Canada legal fund, a group that intends to prepare for legal action against the BC government in response to Bill-19 and emergency orders, according to its website.

“We are in contact with a constitutional lawyer who has agreed to represent this action. However, we must raise a considerable amount of the funds required in order to begin,” the site reads.

Also attending will be Judy Mikovits, a discredited scientist and central character in Plandemic, a viral documentary that helped spread claims that echo Icke’s theories. In the film, she airs her beliefs that masks activate the virus, that her career was the victim of a scientific conspiracy rather than a discredited experiment, and her consistent and explicit vaccine denial.

The mega rally is being held by a variety of groups, many of which have formed during the pandemic. These include early starters like No New Normal, one of the earliest Vancouver anti-lockdown protest groups and Ryan Kulbaba’s A Celebration of Freedoms and Rights (ACFR) from Surrey.

The growing Hugs Over Masks and The Line have spread from Toronto and will be appearing, as will Liberty Talk Canada, a YouTube channel run by Odessa Orlewicz and her husband Norbert that has claimed 5G is “frying” people in Sweden and backs George Soros-focused conspiracy theories.

The Forum for Canadian Sovereignty’s anti-Muslim Mark Friesen led the convoy from Saskatchewan, posting regular updates about the trip as they went, attempting to draw out more supporters.

Vancouver police said they are aware of the coming protest, and told Daily Hive “officers will be monitoring and will respond should anything arise.”

Canada’s anti-lockdown rallies are nexus points for conspiracy and hate groups to cross and spread their ideologies. Frustrations over the response to COVID-19 has boiled over, and anti-mask rallies are frequented by current and former members of groups monitored by the Canadian Anti-Hate Network.

Recently, Nazi-apologist Brian Ruhe and several people alleged to be connected to one of the anti-lockdown groups participated in a mock book-burning, along with the signature “Roman salute.”

Ahead of the event, the Vancouver and District Labour Council condemned the coming protest, saying in a statement that it has concerns over the growth of the “far-right threat in the past months,” using “paranoia and misinformation about the COVID-19 pandemic to recruit new adherents.”

“We are particularly concerned about the immediate threat this full weekend convergence poses to workers in the service and transit sectors,” it said in a statement.