Neofascist acquitted on charges of intimidating and harassing journalists

Neofascist acquitted on charges of intimidating and harassing journalists

Press freedom advocates don’t see the funny side of “prank,” but judge rules there was no intent to intimidate 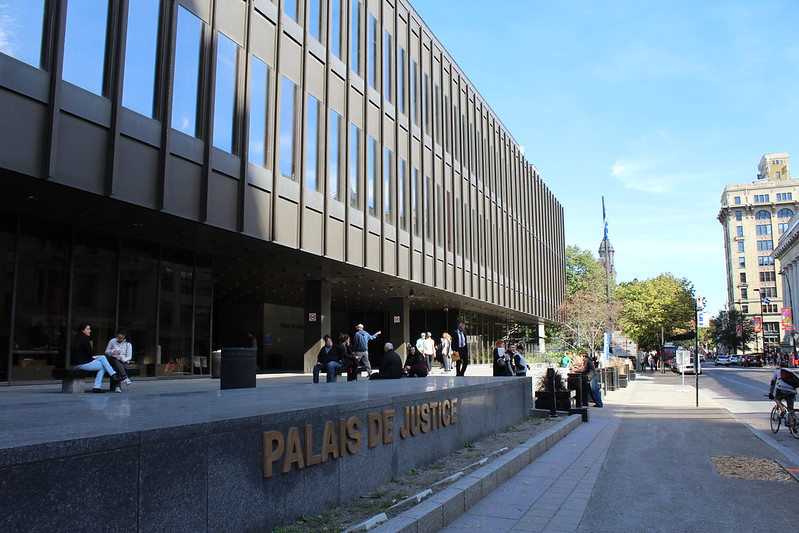 Philippe Gohier knew immediately that the man standing at his office door holding a bouquet of flowers wasn’t there to declare his love.

Gohier was editor-in-chief of Vice Québec when Raphaël Lévesque, leader of the far-right group Atalante, showed up at Vice’s Montreal newsroom with six masked men on May 23, 2018.

Lévesque, who also goes by the name Raf Stomper, “had a bouquet of flowers. He rang the doorbell and the receptionist unlocked it. Simon recognized him immediately,” Gohier says, referring to his colleague at the time, Simon Coutu, who covered right-wing extremism and had written about Atalante for Vice Québec.

Coutu was seated toward the back of the newsroom. “They went straight for him, playing music and throwing flyers, and then they gave him a fake trophy with ‘média poubelle’ [garbage media] written on it,” recalls Gohier. He says the incident lasted only about a minute. “I was in a [glass-walled] upstairs conference room, and by the time I ran downstairs, they were on their way out.”

Your contributions pay the journalists that write these stories. You can help at antihate.ca/donate.

Coutu, who now works at Radio-Canada, declined an interview request. He wrote an account of that day’s events that was published the same day on Vice.

Atalante said on its Facebook page at the time that Vice was starting a “war” through its coverage of the far right.

Lévesque was arrested on June 19, 2018, and charged with breaking and entering, harassment, mischief and intimidation. Almost two years to the day later, on June 10, 2020, he was acquitted of all charges. Judge Joëlle Roy found that “the accused had no intention of intimidating anyone”.

“It was a gesture of intimidation to harass Simon and all of our staff.”

In court testimony reported by La Presse, Coutu acknowledged he was rattled by the prank. “People were shaken up. … I felt surrounded. [Lévesque’s] presence and the presence of people in masks was threatening.”

Gohier doesn’t see the humour in it either.

“It was a gesture of intimidation to harass Simon and all of our staff. There were about ten people in the room, many of whom had nothing to do with Simon’s reporting, and they were profoundly rattled. As editor-in-chief, I was worried for their safety.

“[Lévesque] said it was a joke, but I think that explanation is as stupid as his actions. The whole thing was deeply unpleasant, inappropriate and stupid.”

Gohier says that when Lévesque and his masked comrades entered the newsroom, staff immediately “knew who we were dealing with.”

Researchers describe Atalante as a neofascist group with a few dozen hardcore members and two to three thousand sympathizers. Founded in 2016 out of a fusion of several smaller right-wing groups, the Quebec City–based group has ties with Italian, French and Greek neofascists.

They have drawn the attention of the media and the general public through acts of guerilla theatre such as holding an open-air mass with a Catholic extremist group near the Quebec City ramparts, and “decorating” Montreal’s Olympic stadium with a banner calling for immigrants to leave while the stadium was being used for temporary asylum seeker housing in 2017. They also pulled similar fake trophy stunts involving reporters at Le Soleil and CBC Quebec, and were a regular presence at right-wing rallies in Quebec City when the previous provincial Liberal government was in power.

The Vice incident “was not the first time this has happened to a media outlet,” says Xavier Camus, a Montreal-based philosophy professor and anti-extremism researcher. “They know exactly where the line is and they will not cross it. Instead of roughing someone up, they will simulate a trophy presentation and broadcast it on their Facebook page. That’s how they get their audience and grow their movement.”

Camus emphasizes that there is hard-line neofascist ideology behind the group’s theatrics. “These people dream of a fascist state,” he explains. “They don’t believe in democracy. They want to install an authoritarian regime where white people will dominate, minorities will be marginalized and immigration will stop.”

According to La Presse, Judge Roy was not receptive to arguments centred on the group’s ideology. When Jimmy Simard, a Crown prosecutor who worked on a previous stage of the case, brought up Lévesque’s apparent fascist sympathies at trial — telling the judge that Lévesque had written “Roll out the barbed wire and prepare the Zyklon B,” a reference to Nazi concentration camps, as part of a song lyric — the judge rebuked the prosecutor for “introducing “corrosive and irrelevant elements.”

The judge’s full decision was not available at press time. Jean Pascal Boucher, a Crown prosecutor and spokesperson for the Quebec Crown prosecutor’s office, said his office “acknowledged the decision” and was considering filing an appeal. Lévesque’s lawyer, Mathieu Corbo, said neither he nor his client would comment further.

Roxane Martel-Perron is the director of education and skills development at the Centre for the Prevention of Radicalization Leading to Violence, a Montreal-based think tank that has followed the Quebec City right-wing scene closely.

“Just because fewer people want to participate in traditional protests” due to COVID-19 and the threat of being exposed on social media and doxxed “doesn’t mean they’ve disappeared,” she warned. While she declined to comment on Roy’s verdict, she expressed concern that it would act as a disincentive for people to press charges, and emphasized that it was “important to denounce attempts to strike fear into people.”

Jean-Thomas Léveillé, vice-president of the Fédération professionnelle des journalistes du Québec, fears that the decision amounts to “a free pass” to harass journalists at their workplaces.

“Journalists are worried that this threat to their safety was not taken seriously by this country’s justice system.”

“Would we find it funny if someone barged into a dentist’s office or an accountant’s office or a judge’s place of work? Would the judge have accepted that behaviour in her chambers? The public has a right to criticize our work, and there are many ways to do it.”

“But that’s going too far.”

He also points out that both Coutu and a reporter with Le Soleil were visibly rattled when Lévesque entered their newsrooms, ostensibly as a “joke.”

“If I’m accused of harassing you in public, it doesn’t matter what I intended, it matters how you felt,” says Léveillé. “In private, even more so.”

He is concerned that the decision could affect which subjects journalists choose to cover, and by extension, impact the public’s right to information.

“If a journalist feels threatened in his or her work, freedom of the press is impacted and the public is less informed. If we legitimize [harassment of journalists], where is it going to stop? Are representatives of the state, or of private companies, going to barge in and tell us how to do our jobs?”

“We’re not asking for special treatment for journalists, but they have the same rights and responsibilities as anyone else in society, and that includes the right to work in peace and safety,” he says. “Journalists are worried that this threat to their safety was not taken seriously by this country’s justice system.”

This article was produced in collaboration with Ricochet Media.

Editor's note: Here's our analysis of the verdict.

The acquittal of Raphael Levesque, aka Raf Stomper, should sound the alarms for anyone concerned with the growth of the far-right. While Justice Joëlle Roy bought the argument that the stunt was not meant to intimidate, the neo-fascist group’s activity and ties are strong evidence to the contrary.

Video of the 2018 incident shows Levesque thanking Coutu for “starting a war.” A pro-terrorism neo-Nazi Telegram channel celebrated the incident, writing “We aren’t hanging journalists yet, but they know it’s coming.”

While Levesque was the only individual charged, the idea that the other half a dozen Atalante members cannot be identified is difficult to believe, as Atalante’s membership has been widely documented by Montreal Antifasciste.

Prior to Atalante’s formation, in 2007, Levesque and Yan Barras, both future members of Atalante, along with other members of the Quebec City Stompers, attacked patrons at the Bar-Coop L'Agitée. Barras stabbed 6 individuals and was sentenced to 2 years in prison. Mathieu Bergeron, also a future Atalante member, stabbed 2 Arab men. He was sentenced to 2 years in closed custody.

Just yesterday, on June 12, another Atalante member was convicted of assault against an individual he identified as an antifascist.

As singer of the Atalante bonehead band Légitime Violence, Levesque’s lyrics include “I can hear your bones breaking under my billy club,” in a song about antifascists. In another, he sings “unroll the barbed wire, let’s prepare the Zyklon B!,” a reference to the gas used by the Nazis to exterminate Jews during the Holocaust.

Atalante, and Levesque, have ties to the Italian fascist group CasaPound (and in fact Légitime Violence has played shows with the CasaPound band, Bronson Crew) and Azov Battalion.

Atalante member Shawn Beauvais-Macdonald participated in the deadly 2017 Charlottesville rally, and even provided Heather Heyer’s murderer with a shield, according to photographs of the event.

Rather than be a cautionary tale for far-right actors who wish to intimidate their opponents, the outcome of this trial has only served to embolden the group, and their supporters.