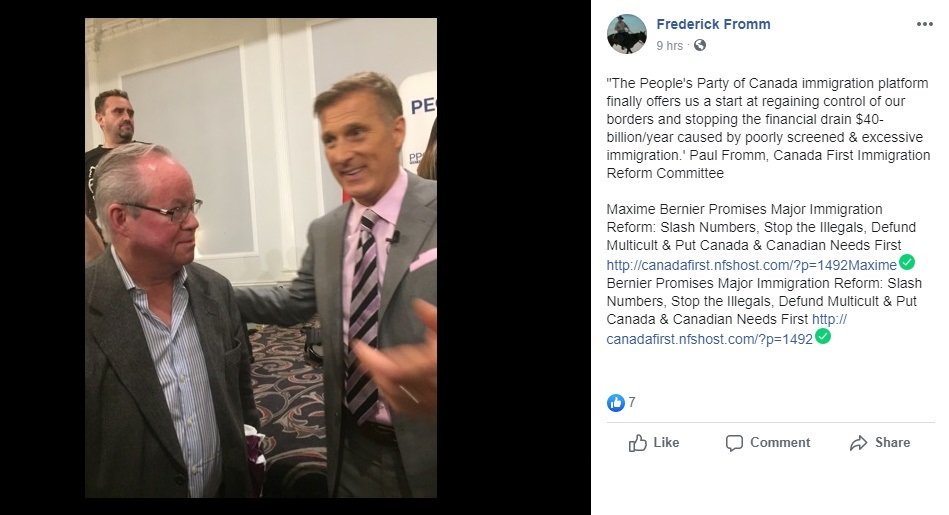 On July 25th 2019, the People’s Party of Canada (PPC) was supposed to have their first candidate rally in the riding of Winnipeg Centre.

I contacted the venue and convinced them to cancel the event with the help of Winnipeg’s anti-fascist and arts community.

This peaceful tactic has disrupted hate groups across Canada, forcing them to cancel public events, and can be initiated by any community member. It does, however, require awareness and support. That’s why Winnipeg FF1, an anti-fascist group I’m part of, puts community action and education at the forefront of anti-racist activism.

The People’s Party of Canada, led by Maxime Bernier, attracts supporters and sympathizers of hate groups. Its immigration policy was endorsed by Faith Goldy, a self-proclaimed “propaganda arm” for the alt-right neo-Nazi movement, and neo-Nazi Paul Fromm. Not long after one of its candidates issued a call for more hate speech so that right-wing extremists won’t resort to murder, an argument that was thoroughly debunked by the Canadian Anti-Hate Network. Bernier told journalists he stood by his candidate's comments.

In the past two years FF1 has counter-demonstrated a Manitoba branch of the militant anti-Muslim Soldiers of Odin, which hasn’t been back since, convinced hotels to cancel an event planned by Paul Fromm, and exposed local activity of the neo-Nazi Canadian Nationalist Party, among other victories.

These successes are the result of an entire community that springs into action any time hate groups try to organize in our neighbourhoods.

On July 19, a community member sent us a photo of a poster for a Winnipeg Centre People’s Party of Canada rally at the Cre8ery gallery. They were upset the gallery, known to be an inclusive space, would host an event for the PPC given Maxime Bernier’s anti-trans statements and close proximity to hate groups.

Winnipeg Centre is one of the most ethnically and economically diverse ridings in Canada, with a large indigenous, refugee and immigrant population. It’s also home to our arts community.

Only a week earlier, the entire PPC executive in another Winnipeg riding, Elmwood-Transcona, quit due to concerns about their own members, the sort of people that would have attended this rally at Cre8ery gallery:

"The biggest problem we face locally though, are our own supporters. Racists, bigots, antisemites, and conspiracy theorists have large presence in the public conversation surrounding the People's Party of Canada. Many of these PPC supporters would deny freedoms to Canadians and close our physical and economic borders. Many more spread disinformation and distrust online via their personal, and sometimes official party channels. None of these are things we would have expected you [Maxime Bernier] to stand beside during the leadership campaign. We are appalled to see it encouraged with a wink and a nod now."

We consulted with folks in the art community and we agreed to give Cre8ery the benefit of the doubt and raise our concerns privately, which we’ve done with other venues in similar situations.

I emailed the gallery owner with examples of the PPC’s transphobia, islamophobia and racism from their leaders, candidates and members, and shared with them the resignation letter of the  PPC Elmwood-Transcona executive. I suggested it would be in the best interest of the gallery and the community it served to cancel the event and keep the gallery an inclusive place for folks in marginalized communities.

Our exchanges can be found here.

Gallery owner Jordan Miller responded kindly, but said she isn’t into politics, has no interest in the party or its platform, and as a business that rents space, was obliged to keep the $75 booking.

I offered to cover the cost, and promised that we would rally the community to support her and the gallery if there was any backlash from the PPC. We also made it clear that if the gallery decided to host the PPC that we would make that decision public and urge people to boycott the gallery. This is one way we use our free expression rights to counter hate group activity.

We don’t take the promise of a public boycott lightly. As was the case with the Canadian Nationalist Party’s event at the Belgian Club last year, our exposing this kind of activity can lead to financial consequences for organizations that host hate groups. In this case, because the art community for the most part embraces anti-fascist principles, I knew that the gallery would be doing itself a disservice by hosting a PPC event.

Up to this point we were keeping our exchange private, hoping that the venue would cancel on its own. Unfortunately, Miller told me the PPC rally would continue as planned.

It worked, as it usually does. The gallery owner cancelled the PPC rally, returned their money, and declared that they won’t do political events and that they are proud of being an inclusive space. 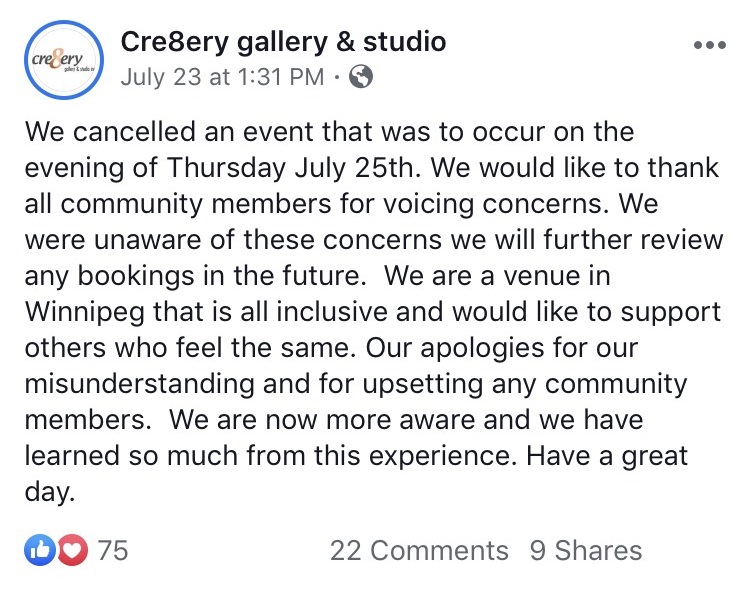 We took our post down and replaced it with one informing everyone of the good news. Folks responded with their support, and thanks to Miller and the gallery for making the right decision.

We expected some backlash from PPC members for ruining their day, and later that night they went after me personally.

Monique Choiselat, the head of the Winnipeg Centre PPC riding executive, made multiple posts calling me a “terrorist,” including my picture, address, and phone number. Those posts were removed by Twitter and Facebook, including those posted by the PPC Winnipeg Centre account. To be clear: this is a racist and defamatory accusation that further demonstrates how PPC organizers and supporters target racialized people like myself.

The important takeaway here is that we were successful. All it takes to disrupt hate groups when they are planning events is staying vigilant, sharing research, and asking the community to help convince venues that they don’t want to associate with hate groups. You can do it too, either by getting one of these campaigns started, or by making phone calls and sending emails.

I want to thank my friends at FF1 and this fantastic and active community that has always been there to help keep hate groups out of Winnipeg and make this one of the hardest places in Canada for them to organize. As we say here in the Prairie capital:

Omar Kinnarath is an anti-fascist activist and organizer with FF1, an organization that monitors, exposes, and organizes against far-right activity in Winnipeg, Manitoba.