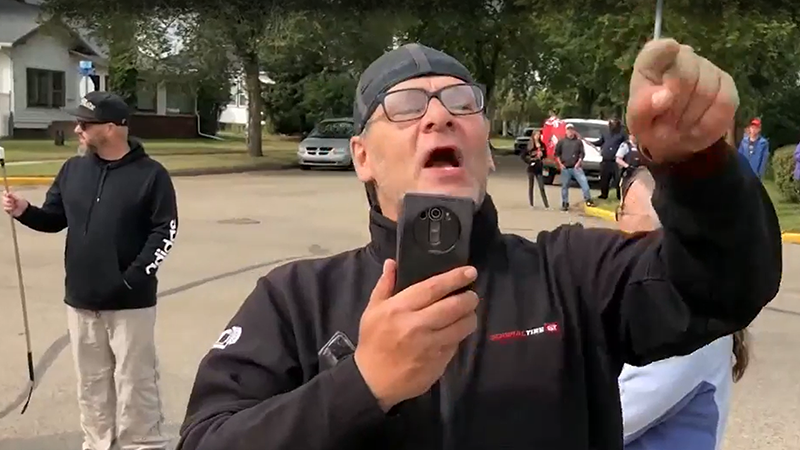 During a press conference in Ponoka, Alberta held by Black and Indigenous Alliance AB (BIAA) to talk about one of their members being struck by a car, a group of counter-protestors arrived to disrupt the event. While claiming to do so to combat disinformation and anti-white racism, many of the counter-protesters are known far-right figures.

"Yesterday, Black and Indigenous Alliance AB was notified of a yellow vest counter-protest taking place where we had planned to protest,” BIAA said in a statement to its Facebook page.  “These self-claimed 'patriots' said they were going to convoy from Calgary.”

After arriving in the town, demonstrators said, they “were confronted by the yellow vest counter-protestors.”

“Later on, as we were making our way back to the rendezvous point, a truck swerved into our group, hitting one of our warriors and causing bodily injuries. The warrior was then taken to the hospital. The driver that hit our warrior is currently at large."

Curtis Fagan sustained injuries after he says the mirror of the truck collided with his eye. Police later told CBC that demonstrations had been going on for weeks but this was the first instance of violence.

During a press conference to address what the group said was a deliberate attack on one of its members, counter-protesters arrived again. Among the ranks was Wexit co-founder Pat King, ousted Canadian Combat Coalition founder Ryan Dean, and one-time Yellow Vester Les Michaelson, among others.

Ahead of the initial event King appears to have put out word on his Facebook account, asking for DMs for those in Central Alberta that were free the day of.

“There’s something I’d like to ask you,” the status reads.

Multiple responses show an interest, though it cannot be confirmed if this was for the same event. King has previously gone on record about his feelings about the “Anglo-Saxon replacement,” that plans to “flood [Canada] with refugees,” and subvert the education system -- a thin rebranding of the great replacement theory touted by ethnonationalists.

During Monday’s press conference, King can also be heard berating the speakers, repeatedly calling them liars. Something he reiterates during a breakdown on the media coverage afterwards on a live stream.

“They are talking about lighting shit on fire,” he said of protestors after challenging the actual motivation of the demonstrators. “These guys, mark my words 100%, these people, this group of predators are going to start attacking small rural communities -- it’s a matter of time.”

These allegations follow the alleged attack on one of their group by an individual King identifies as a protest organizer and claims the man struck a female counter-protestor as she attempted to video licence plates. Video of the event shows a metal water bottle being used to block recording. The sound of the waterbottle connecting with the phone is heard, and the woman says it injured her hand.

Another video, shot after the incident, shows police allowing the Black and Indigenous supporters to leave the area after speaking with officers. King and his compatriots shout demands for charges to be brought.

Other known far-right figures included Ryan Dean, the founder of the Canadian Combat Coalition before he was removed from leadership and ejected from the group, after membership accused him of taking money from the organization and sowing “division.”

Heard very loudly in the background of videos of the event, loudly enough to drown out parts of the press conference and media's questions, is a man with a megaphone. He shouted over the land acknowledgement and refused to identify himself to the media.

His name is Les Michaelson, who lists himself as the owner of Rentex Homes in Edmonton, which manages several apartment buildings. 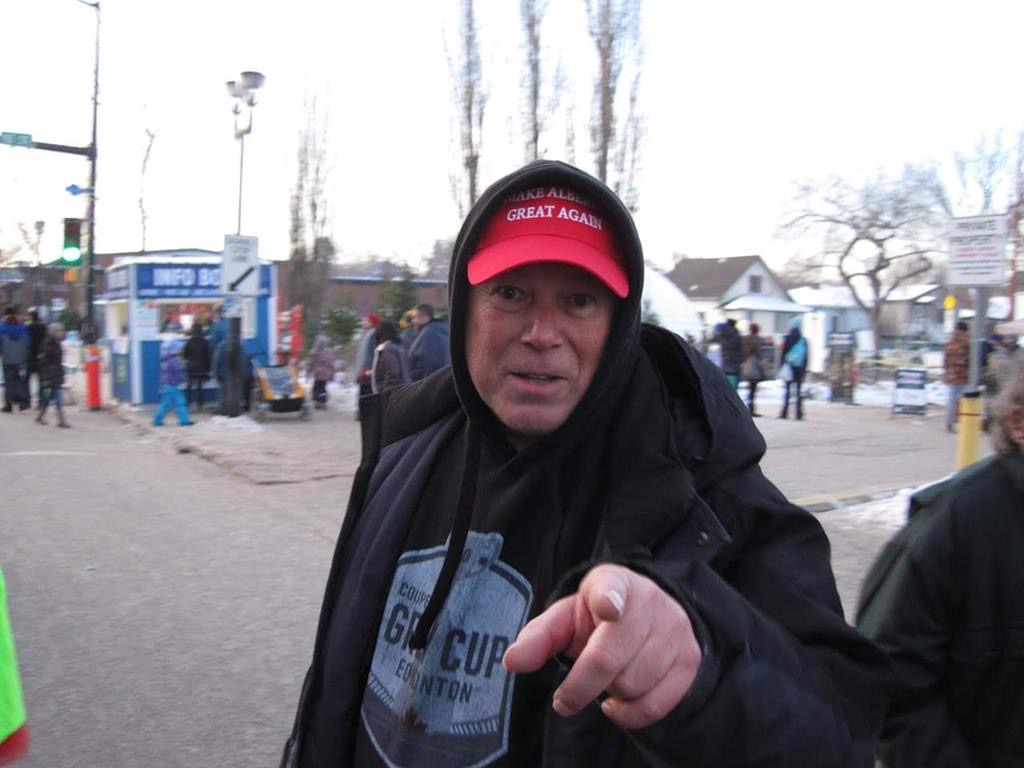 Les Michaelson. Note: this photo is from a different event.

“You should have spent more money on your PA system, because this little horn is way louder than that little piece of crap,” he taunted as the speakers set up.

Michaelson and his megaphone are known for their roles agitating within the Wexit movement and disrupting a campaign stop by former Alberta Premier Rachel Notley using similar methods. Despite his action being restricted to shouting “Antifa go home,” over loudspeakers, the noise was a constant hindrance for the alliance members.