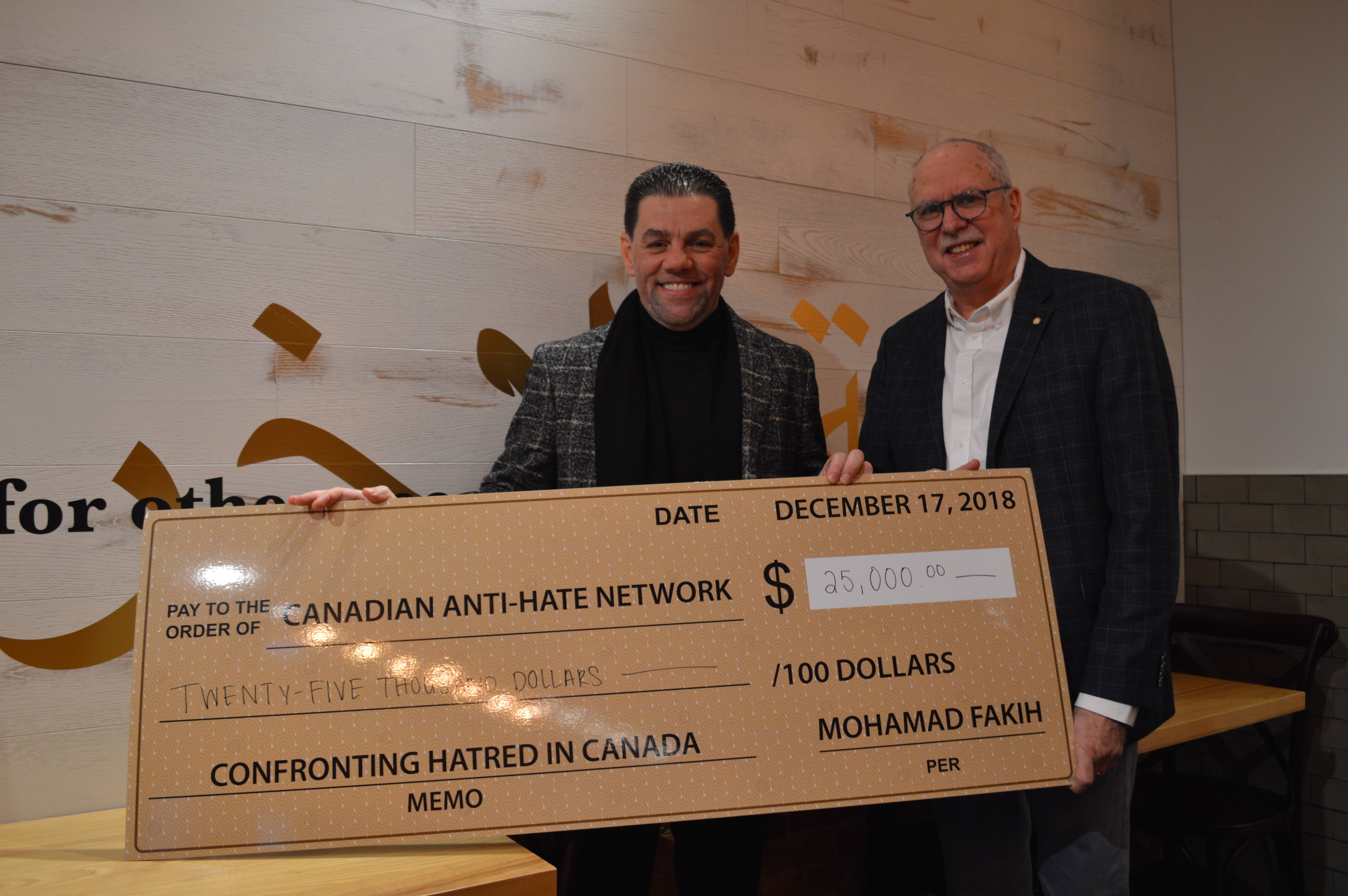 The donation will bring the network closer towards its first major fundraising goal – to hire an additional full time investigator to monitor and report on hate groups in Canada.

The donation comes just as Mr. Fakih received an apology from Ron Banerjee, a regular presence and bit-player in the anti-Muslim movement in Toronto.

In August 2017, blogger Kevin J. Johnston and Ron Banerjee made videos in front of Paramount Fine Foods during an anti-Muslim demonstration and made comments that were overtly hateful towards Muslims and specifically targeted Fakih and his business.

Fakih launched a defamation suit against both individuals, resulting in an apology from Banerjee.

“I am grateful that I was able to confront this hatred, though it has taken a significant emotional toll," says Fakih. "Not everyone is able to do what I felt I needed to do. It is for this reason that I will be marking this moment by further supporting efforts to combat hate in Canada. We need to protect our rights and freedoms so that everyone can fully contribute without fear of discrimination or hatred.”

“We are immensely grateful for this generous donation. This donation will help us to do even more critical work in calling out those who fuel hatred and division in our communities,” says Bernie M. Farber, Chair of the Canadian Anti-Hate Network and former CEO of the Canadian Jewish Congress.

“Mr. Fakih demonstrated a true sense of courage and civic responsibility. In standing up to this virulent Islamophobia, Mr. Fakih spoke out on behalf of all who have suffered racism, bigotry and hatred. He made it clear that anyone promoting hatred can and will be pursued to the fullest extent of the law."

“We’re all in this together.”

"We are pushing for new tools to hold individuals who spread hate propaganda responsible for their actions," says Evan Balgord, Executive Director of CAN. "That hard work should not always fall on the shoulders of the targets of hate and defamation."

The suit against Kevin J. Johnston, a blogger who makes videos targeting Muslims, women and LGBTQ+ persons, continues. Johnston is also facing a separate criminal charge for the wilful promotion of hate.

Ron Banerjee represents RISE Canada - the same 'group' that at one time included Jennifer Bush, the woman who heckled Prime Minister Justin Trudeau and later went viral for yelling at Jagmeet Singh. RISE Canada is, however, largely a one-man group of Ron Banerjee.

Banerjee identifies as a Hindu nationalist and is a regular presence at the near-monthly anti-Muslim demonstrations in Toronto alongside groups like the Canadian Coalition of Concerned Citizens, Jewish Defence League, and the III%ers, an anti-Muslim self-styled militia group.

Banerjee has been active for years, and for a fuller history of his actions, visit https://anti-racistcanada.blogspot.com/search?q=banerjee