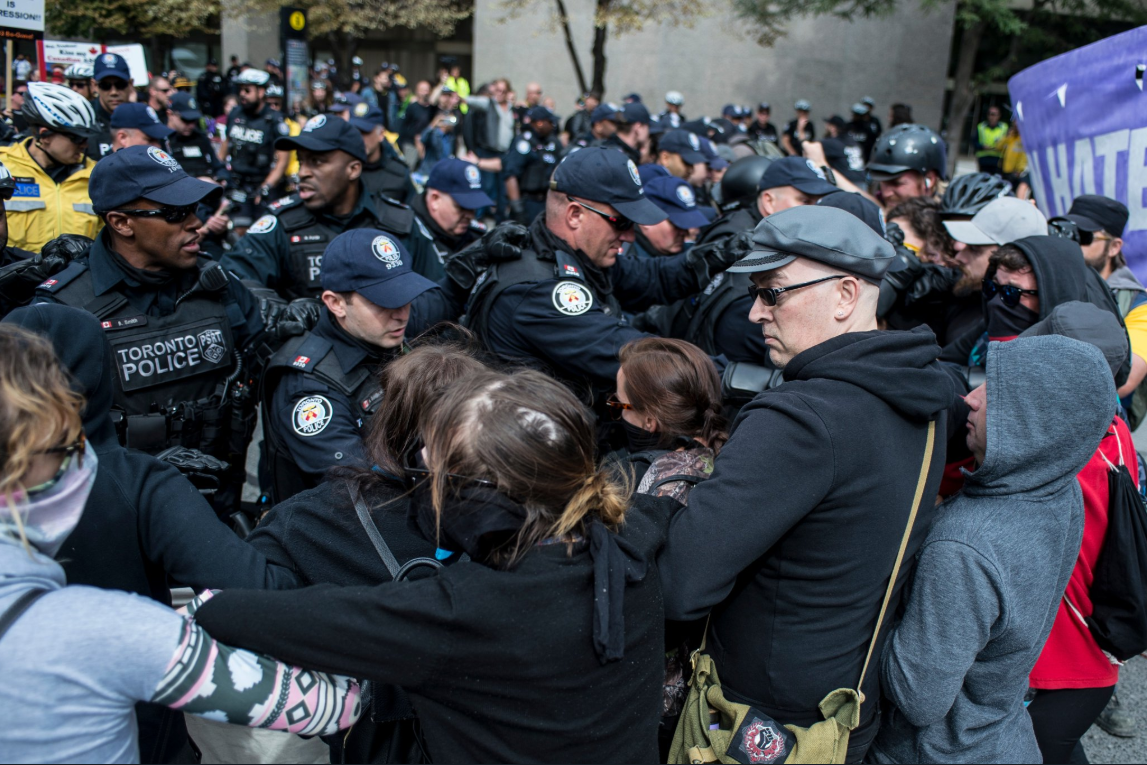 On Saturday, the Toronto Police Service repeatedly used force to break a line of peaceful protesters in order to permit a march down Bay Street by members of racist and neo-Nazi groups.

The rally, hosted by the anti-Muslim extremist group PEGIDA, was joined by members of the Soldiers of Odin and Northern Guard, groups with demonstrated neo-Nazi ties, and the Proud Boys, who have been responsible for a number of assaults at recent demonstrations.

At the beginning of the rally, the hate groups were separated from anti-racism counter protestors by fencing and police. “The police could have maintained public order by allowing the hate groups to complete their rally where they started. Instead, Toronto Police called reinforcements to force a march by hate groups through peaceful counter-protestors,” said Canadian Anti-Hate Network (CAN) board member and lawyer Richard Warman.

Saturday is only the most recent example, but similar situations have played out several times over the past year. Hate groups will continue to turn rallies into marches to use the police as a weapon against citizens who stand up to their poisonous message if the Toronto Police Service permit themselves to be used in this way.

"The police have a responsibility to maintain order and public trust," said Nigel Bariffe, president of the Urban Alliance of Race Relations. "That public trust is eroded when the police give the perception of being on the side of those who are spreading messages of hate and division."

Unfortunately, this is nothing new, notes Warman.

“In the early 90s I witnessed Toronto Police on horseback use batons against hundreds of anti-racism protestors to clear a path so that members of the neo-Nazi Heritage Front could enter the University Avenue courthouse en masse. This flies in the face of the fact that Canada has repeatedly signed international legal treaties obliging us to counter hate group activity - not protect it."

We are requesting a meeting with the Toronto Police Service to discuss these concerns and find positive solutions to this and other related issues.