After threatening demonstrators who “come to my fucking town," Pat King is organizing another counter protest against an anti-racist rally in Alberta 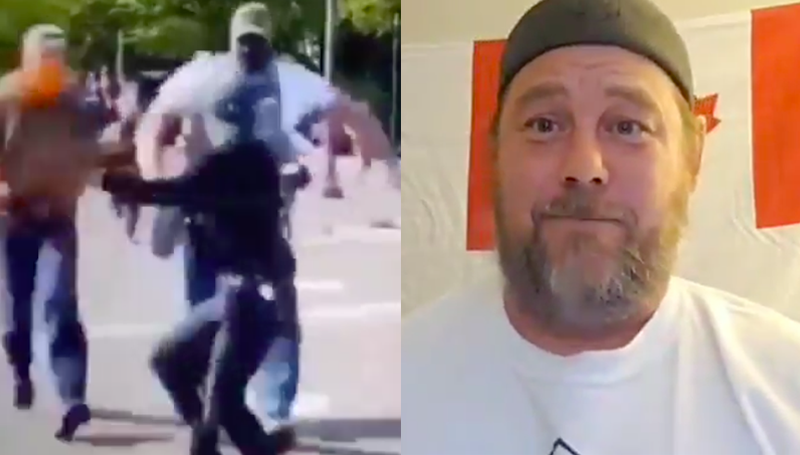 Following his disruption of a press conference in Ponoka, Alberta by Black and Indigenous Alliance AB (BIAA), Wexit co-founder Pat King not only made threats of violence against demonstrators he calls “Antifa,” but is now organizing a second counter-demonstration against an event in Red Deer.

Backed by a flag bearing the Canadian Forces tri-service symbol, King holds up a tablet showing footage of two large masked protesters, one holding what appears to be a paintball gun, charging another dressed in all black holding a sign.

“Bring on the Red Kingdom,” he says, misquoting the rally song for the Kansas City Chiefs football team, before playing the video.

“This is what’s going to happen very soon and if you come into my rural communities, I’m going to be this big guy in a white shirt,” King added, pointing to himself.

As video plays, the person wearing black, assumed to be part of Antifa by King, is chased down and thrown to the ground by a large man wearing a tactical vest over a white shirt. Kneeling over the fallen person, the man strikes them several times.

“Watch what he does,” King laughs. “Little slaps to the face. That’s patriots kicking Antifa out of their towns. It’s what your mommy should have done to you.”

Playing the video several times, the replays are paired with new threats.

Support us, so we can continue to investigate hate in Canada: antihate.ca/donate

On Thursday, King went on stream again to address his supporters on social media, followed by the creation of another shorter video for the "Tik-Tok realm," asking for them to join him outside of Red Deer city hall on Sunday, September 20.

"If you're a fan on my page or a follower, I’m asking in a very important, impromptu message that on Sunday, September 20, at 4 pm in Red Deer, Alberta, Canada Black Lives Matter and Antifa are planning a huge rally to disrupt our community [sic]," he said.

"Help support us to help drive out these left-wing anarchists that are trying to disrupt communities and trying to threaten people."

It's likely that he's referring to the Anti Racism Rally currently planned for that day. The event posting describes it as a peaceful community discussion about inclusivity, combating racism, and the sharing of speakers' personal experiences.

King's attempts to galvanize people to join him at the rally included assertions that anti-racists are bringing "truckloads" of people" from surrounding areas.

Despite his threats earlier in the week, he says Sunday will be peaceful and that "there will be children there."

It's also his belief that the anti-racism rally is open to "anybody who wants to speak," and that he should be given a platform if he comes "professional," though quickly added if he was not, "I have another stage set up beside them."

The press conference King previously helped disrupt was held outside of a Ponoka RCMP station on Monday, after a BIAA member had been struck by a car during a weekly action the group holds in the city.

“As we were making our way back to the rendezvous point, a truck swerved into our group, hitting one of our warriors and causing bodily injuries," organizers said in a statement. "The warrior was then taken to the hospital. The driver that hit our warrior is currently at large."

Curtis Fagan sustained injuries after he says the mirror of the truck collided with his eye. Police later told CBC that demonstrations had been going on for weeks, but this was the first instance of violence.

Ahead of the initial event, King appears to have put out word on his Facebook account to get counter-demonstrators, asking for DMs from those in Central Alberta who were free on the day of the press conference.

“There’s something I’d like to ask you,” the status reads.

King has previously gone on record about his feelings about the “Anglo-Saxon replacement,” that plans to “flood [Canada] with refugees,” and subvert the education system -- a thin rebranding of the great replacement theory touted by ethnonationalists.

At other points, King has expressed overtly racist and anti-Semitic statements, stating in a 2019 stream “unless you want to change your national language to Chinese or Mandarin or Hebrew,” and going on to compare Chinese names to the sound of change falling.

During Monday’s press conference, King can also be heard berating the speakers, repeatedly calling them liars. Something he reiterates during a breakdown on the media coverage afterwards during another live stream.

“They are talking about lighting shit on fire,” he said of protestors after challenging the actual motivation of the demonstrators. “These guys, mark my words 100%, these people, this group of predators are going to start attacking small rural communities -- it’s a matter of time.”