Gregory McNeil of Kamloops, BC was charged in 2010 after drawing a gun on RCMP officers 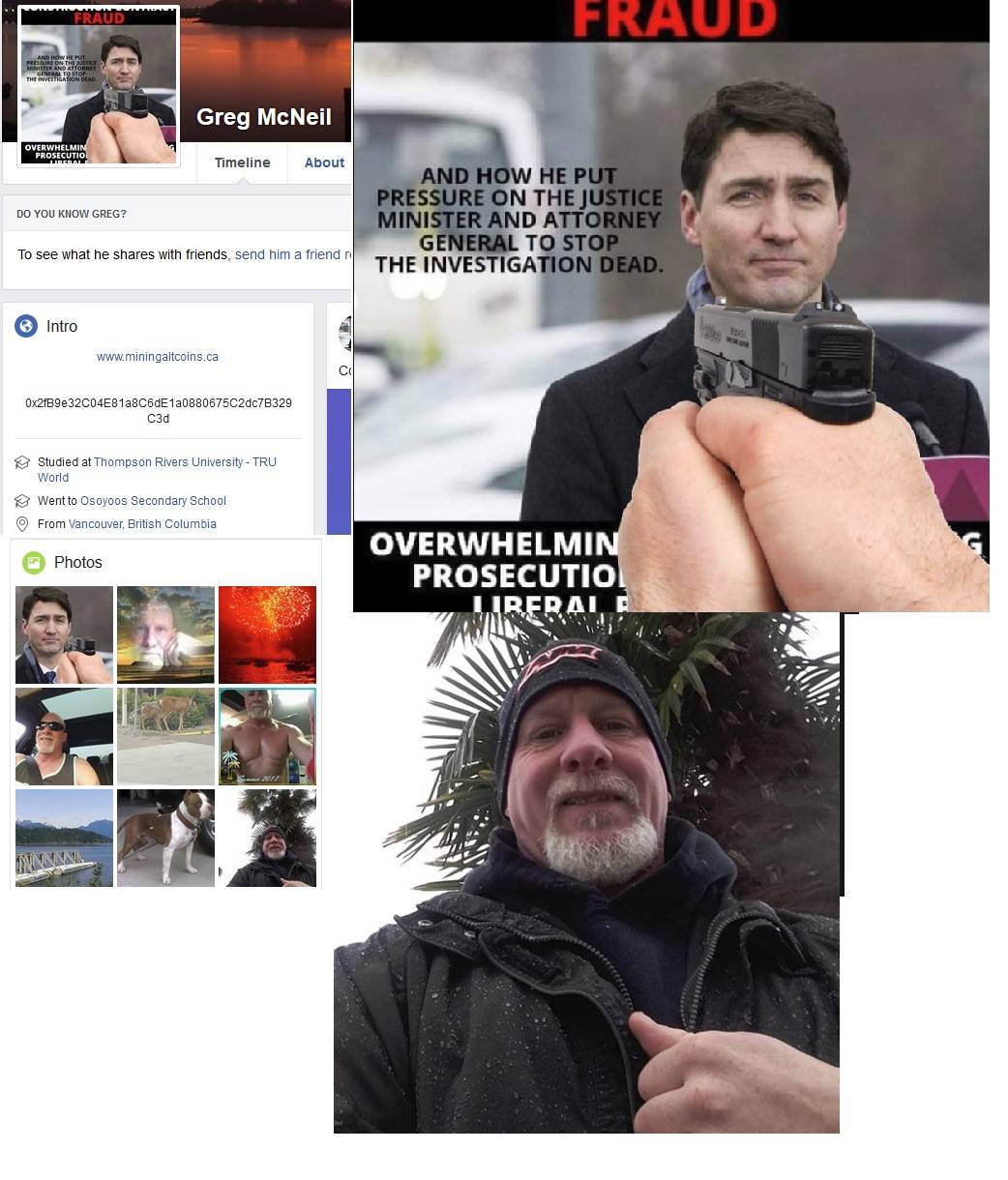 Yellow Vests Canada Exposed has documented dozens of death threats on the Yellow Vests Canada Facebook page directed towards Muslims, the Prime Minister, and others; hatred directed at Muslims, left-leaning individuals, government, the mainstream media, and, occasionally, law enforcement; conspiracy theories; and support for the Conservative Party of Canada and Bernier’s People’s Party of Canada. Its main Facebook group has over 100,000 members and one of its main organizers has a history of posting racist and antisemitic comments.

Regardless of what the gilet jaunes movement represents in France, the Canadian Yellow Vests movement has been entirely co-opted by the far-right and includes almost every anti-Muslim hate group in Canada. It is characterized as a public safety threat in a briefing note authored by the Canadian Association for Security & Intelligence Studies – Vancouver.

In response to a post about storming parliament, Yellow Vests Canada supporter Greg McNeil suggests they carry out mass arrests, shooting anybody that gets in their way. McNeil posts, “Time to start killing all the protectors…Police, security…etc.” He also claims to have a cache of weapons and friends who are similarly armed.

The pictures on Greg McNeil's Facebook profile appear to match a picture of Gregory Warren McNeil, who was arrested in 2010 and charged with multiple firearms offences and harassment. McNeil threatened to kill bank employees, prompting a visit by the RCMP. He drew a handgun and the officers shot him. McNeil told investigators that he’s a better shot than most police officers and could have shot the officers if he wanted.

The RCMP searched his home and found a hidden room full of weapons, ammunition and bullet resistant vests, as well as a B.C. sheriff uniform and a custom officer’s badge.

McNeil was sentenced to over 5 years in prison and has a lifetime ban on owning firearms.

The RCMP tells the Canadian Anti-Hate Network that they respect “[The Yellow Vests movement’s] right to peaceful, lawful, and safe protest. Should someone have concerns about their activities online or in person, we would encourage them to contact the police in the jurisdiction they live in, to report. The RCMP takes complaints of threats seriously.”

Greg McNeil is no longer a member of the Yellow Vests Canada Facebook group.

Another Yellow Vests Canada supporter, Tony Green, of Campbell River, BC, was arrested on January 28, 2019 after allegedly pointing a firearm at an off-duty RCMP officer.

According to an article in the Vancouver Sun, law enforcement seized over 100 guns from Green’s home including a Bren machine gun, “homemade silencers, zip guns, prohibited over-capacity magazines, and untraceable firearms,” as well as explosive materials.

The Yellow Vests Canada movement have been holding demonstrations across the country every Saturday to protest immigration policies, what they believe is the United Nations takeover of Canadian sovereignty, and a host of other issues popular among the far-right. Now, they are planning to run a convoy of trucks from Alberta to Ottawa, which Tony Green promoted.

The ‘United We Roll’ convoy departs on February 14th and arrives in Ottawa on the 19th. Originally branded as a Yellow Vests event, organizer Glen Carritt claimed that the United We Roll convoy is no longer affiliated, citing “philosophical differences.” However, organizers of the convoy are also members of the Yellow Vests Canada group, and he has says his group still "identifies with the yellow vests" and they are welcoming them to the convoy.

Several of the organizers are also supporters of other hate groups such as Canadian Combat Coalition, Soldiers of Odin, and Worldwide Coalition Against Islam.

Yellow Vests Canada Exposed documents the overt racism, hate speech, death threats and calls to violence posted by members of the Yellow Vest Movement in Canada. Their work can be found on Twitter and Facebook.