Don’t be a bystander, but dialing 9-1-1 should definitely not be your first response 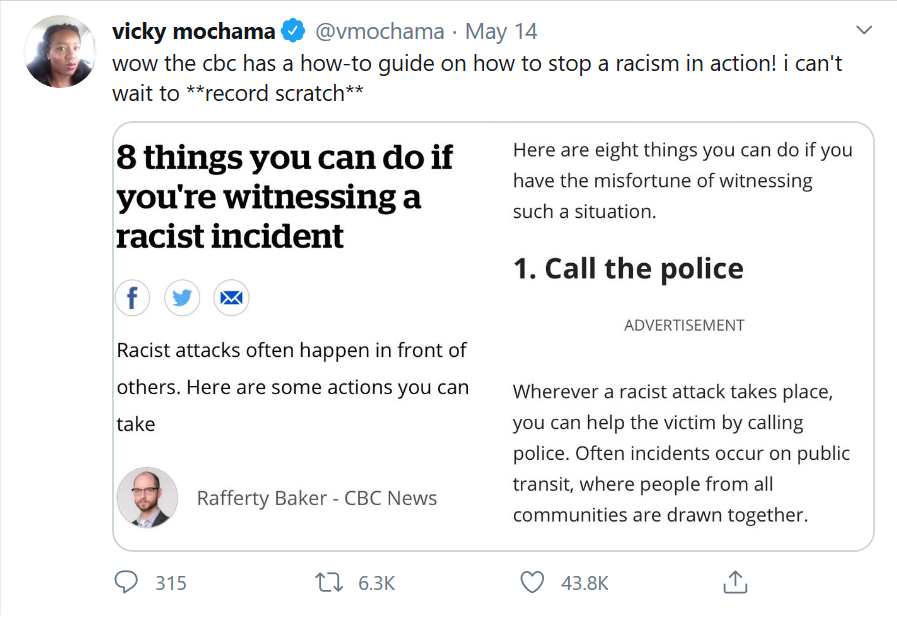 On May 14th, CBC published an article about bystander support and response to anti-Asian racist attacks during the pandemic. The backlash to their number one suggestion was so swift that they had to re-publish it, focusing on their error in the sentiment that people should call the police. In the original piece, the text read:

“1. Call the police. Wherever a racist attack takes place, you can help the victim by calling police. Often incidents occur on public transit, where people from all communities are drawn together.”

CBC’s choice to interview a constable from the Vancouver Transit Police amazes me knowing how punitive, punishing and racist fare inspectors have been to Black and racialized people in this country. That said, racist incidents on public transit are a well-documented problem across the country - especially now.

The police murder of George Floyd in Minneapolis is only the most recent example of police disproportionately using excessive force and killing Black and racialized people – and it’s conceited for Canadians to think it’s not happening here in Canada. Just yesterday a mother says police shoved her daughter Regis Korchinski-Paquet off their balcony in Toronto and the SIU is investigating her death. In 2018, the Ontario Human Rights Commission found that Black people in Toronto are 20 times more likely to be shot and killed by police than white Torontonians.

The people who experience racism in Canada are in need and deserving of protection and should be the loudest voices on tackling racism- not the dissent to a tonedeaf CBC suggesting that we should just call the police. And despite people’s well intentioned view around this being a teachable moment where we are learning more about each other, the burden is not for racialized people to share their pain to respond to people determined to misunderstand and erase it.

While CBC’s retraction and correction is a victory, the arrogance required to tell Canadians what to do when they witness a racist incident without a critical race lens needs to be interrogated. I hope they understand that there are ethical standards they must meet if they expect to be trusted, especially among non-white Canadians. We are owed an accountability that is overdue and seems very uncomfortable, but is necessary.

The topic of what to do when we see a racist incident is an important one to discuss, but to propose we have things so under control when it comes to racism here that a definitive list can be generated speaks to the need to continue to push progressive agendas that are holistic, equity centred and community minded.

I am certain that if it wasn’t for the backlash, CBC would have let this remain on the internet. It’s a reflection of a holier than thou mindset that Canada is a less racist country than others that wipes out the perspectives of anyone living on the margins, and for the most part centres white, monied, and able- bodied Canadians. It’s an erasure of humanity to ignore lived experience while giving advice. The rhetoric in the article speaks to what voices our national media continues to elevate, often in contradiction to a financial bottom line (marginalized people will tune in more if there is respect) or the true opinions and experiences of most Canadians. Particularly CBC in Vancouver - to be on the west coast of this country and ignore the constant oppression, abuse, and activism around Indigenous issues of this very kind is inexcusable.

“There’s an idea that if Indigenous people are off the reserve we lack community. We don’t. Our well-being is provided for and by each other on reserve, in town and in the hearts of the city. When we need something we turn to our community, it is where we find safety and love. Telling an Indigenous person, or more specifically, telling an Indigenous woman or two spirit person to turn to the police for safety is about as unlikely a scenario as finding a pot of gold at the end of the rainbow. Neither exist.”

Having a working knowledge of the history of policing in North America, particularly how the system (like white supremacy) has violently taken so much from Black and other racialized communities- has always made me extremely weary of the police. A few years ago, my job was to facilitate workshops between police, community organization leaders, and youth. The initiative was one of many we have in the city meant to ease tensions between marginalized communities and the police, and push the exhausting agenda that police should be able to comfortably move through neighbourhoods they investigate. This was around the same time we were getting more information about carding, and we discovered police were using unjustified street-checks and their community relationships to build a database of anyone they want.

Before that job, I worked on a provincial government initiative focused on youth outreach, community empowerment, social exclusion and youth violence. The space and entitlement given for police lobbying was overbearing. It was not about if they were involved, it was how much and it was always too much. It struck me that the majority of youth and police mentorship programs had a lot of Black children attending, and I wondered why is it so important for Black youth to trust police? Just because they have to see them all the time? I could not wrap my head around this and it stayed with me.

Police oversight leadership seemed so devoted to protecting the sanctity of policing, which to me seemed so far from accountability. It was only when I attended my first SIU inquest as an outsider years later that I understood the breadth and depth of how uncaring and dangerous the whole system is for Black people. I realized how deeply vested the police system was in two things: their image and their connection to Black communities. It terrified me because I could not see this in good faith while Black and Indigenous peoples are “disproportionately affected by police violence relative to other ethnicities.”

It can be overwhelming to reckon with the true reality of racism in this country, but we have to tell the truth if the aim is to neutralize it. Lists of suggestions for bystander interventions during a hate incident are not always unhelpful, but a critical race toolbox includes an evolving knowledge of the power structures in society that is honest in examining the deep and undeniable inequities in this country.

We pay our contributors. Since you've made it to the end, please help us pay for the next one. Visit antihate.ca/donate.

The opinions in this piece are those of the author and do not necessarily represent those of the Canadian Anti-Hate Network.