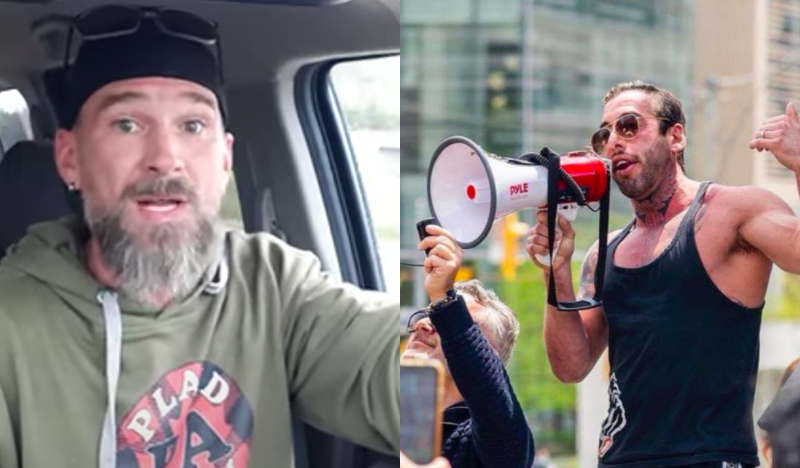 Anti-masker Chris Saccoccia was interviewed by Plaid Army vlogger Derek Harrison on Tuesday. The interview started with Saccoccia recalling his version of events with the anti-mask protest at Dundas Square on October 3rd, - an event attended by far-right politicians like PPC leader Maxime Bernier and Republican Party of Canada candidate, Rob Carbone.

Plaid Army is a collection of far-right vloggers who often appear on each other's shows. Several of them are obviously antisemitic and/or deal in other forms of hate speech, like Harrison.

Harrison tried to lead Saccoccia into discussing an antisemitic conspiracy that he often shares on his channel - that Jews control the government. This exchange happened when Saccoccia -- better known as Chris Sky -- claimed that on a recent trip to the Netherlands he saw plenty of people not wearing masks.

“At that point you have to start realizing that there’s something else going on here,” Harrison states.

“Who’s in control of the government right now? We don’t have to answer that if you don’t want to,” Harrison chuckles.

Implying Jewish control of the government is a common feature on Harrison's channel, feeding into the long standing antisemitic trope that a Jewish cabal controls governments, banks, and world affairs.

Saccoccia didn't take Harrison's bait to make an explicitly antisemitic statement, instead saying: “We got the globalists in charge of the government . . . Look at the hit pieces that are coming out on me today. We either have government news writing it like CBC or CTV or we have fucking rags like VICE which is owned by George Soros.”

George Soros, a Jewish multi-billionaire philanthropist, is frequently accused by extremists and conspiracy theorists of working to tarnish the reputation of their movements and leaders, including US President Donald Trump.

While 'globalist', like 'cultural marxist', is sometimes an antisemitic dog-whistle, it's also true that uninformed individuals in the far-right ecosystem use it without understanding it's dual meaning.

Harrison often uses antisemitic language in his Plaid Army videos. On August 2nd, he spoke with Travis Sherwood, another Plaid Army member from Calgary, about how “some people went through the Q[Anon] conspiracy, while that taught to listen and find things out for themselves, now it’s not just Q anymore. It’s JQ. You can’t just leave Q by itself, there’s a J with that Q”.

The “JQ” is the “Jewish Question” - the antisemitic debate over how to handle and treat the Jewish people. QAnon itself is a facsimilie of the Protocols of the Learned Elders of Zion, a debunked hoax text from the early 1900s which antisemites claim outlines the Jewish plan to control the world.

“I think JQ is the last stop when it comes to conspiracy... There’s no argument that can be had. The Kalergi plan isn’t a conspiracy theory anymore, it’s demonstrable, it’s observable, fuck, it’s repeatable on multiple ends. We see it for what it is,” Sherwood said during the conversation.

The Kalergi plan refers to a racist conspiracy theory that alleges that a plot to mix white Europeans with other races through immigration would diminish white identity, and create a society controlled by Jewish elite.

It’s also worth noting the comments during the livestream, including those from user “George L Rockwell of the Northern Order” who stated “Russia is funding the fake right wing and the left wing in U.S destabilizing U.S for Chabad” and “Imagine a boot stamping on a human face forever. That’s coming for the non-Koshers”.

George Lincoln Rockwell was the founder of the American Nazi Party and an antisemite who believed that the civil rights movement was a means for Communist Jews to control white people.

In an August 19th livestream after the FBI Records Vault Twitter account bot tweeted a link to the Protocols of the Learned Elders of Zion. Harrison used the incident to suggest that the Protocols are legitimate -- it is not.

Harrison suggested that the error was proof of the legitimacy of the hoax, and that the FBI tweeted the link intentionally.

“This is a big, big day when the FBI tweets out the fucking Protocols of Zion. All those people that decided to leave the plaid army and said 'no, talking to [Holocaust denier] Ryan Dawson is just too far, talking about the JQ is just too far, you can't do it.' And then the FBI comes out and tweets something like this. Why would the FBI do that? To cause a ruckus? Do you think it'll make it into the news? Or is it just to wake people up and go through the different circles of angry people?"

The video then jumps to an edited clip of Senator Bernie Sanders addressing a classroom:

“What about Jewish people? What’s different? How are they different?... Their religious beliefs were different, but also they were greedy and selfish people, also had strange sexual habits and so forth and so on.”

In addition to antisemitism, Harrisson has also touted transphobic, misogynist, and anti-Muslim beliefs that he shares regularly on his Youtube channel. Harrison has appeared with other members of the Plaid Army like hosting well-known antisemites Ryan Green and E. Michael Jones, and streaming their appearances on the white nationalist Red Ice website on their YouTube channels.

Red Ice has been banned from YouTube for violating their terms regarding hate speech and is another regular source of antisemitic, anti-immigrant, and overtly fascist content.