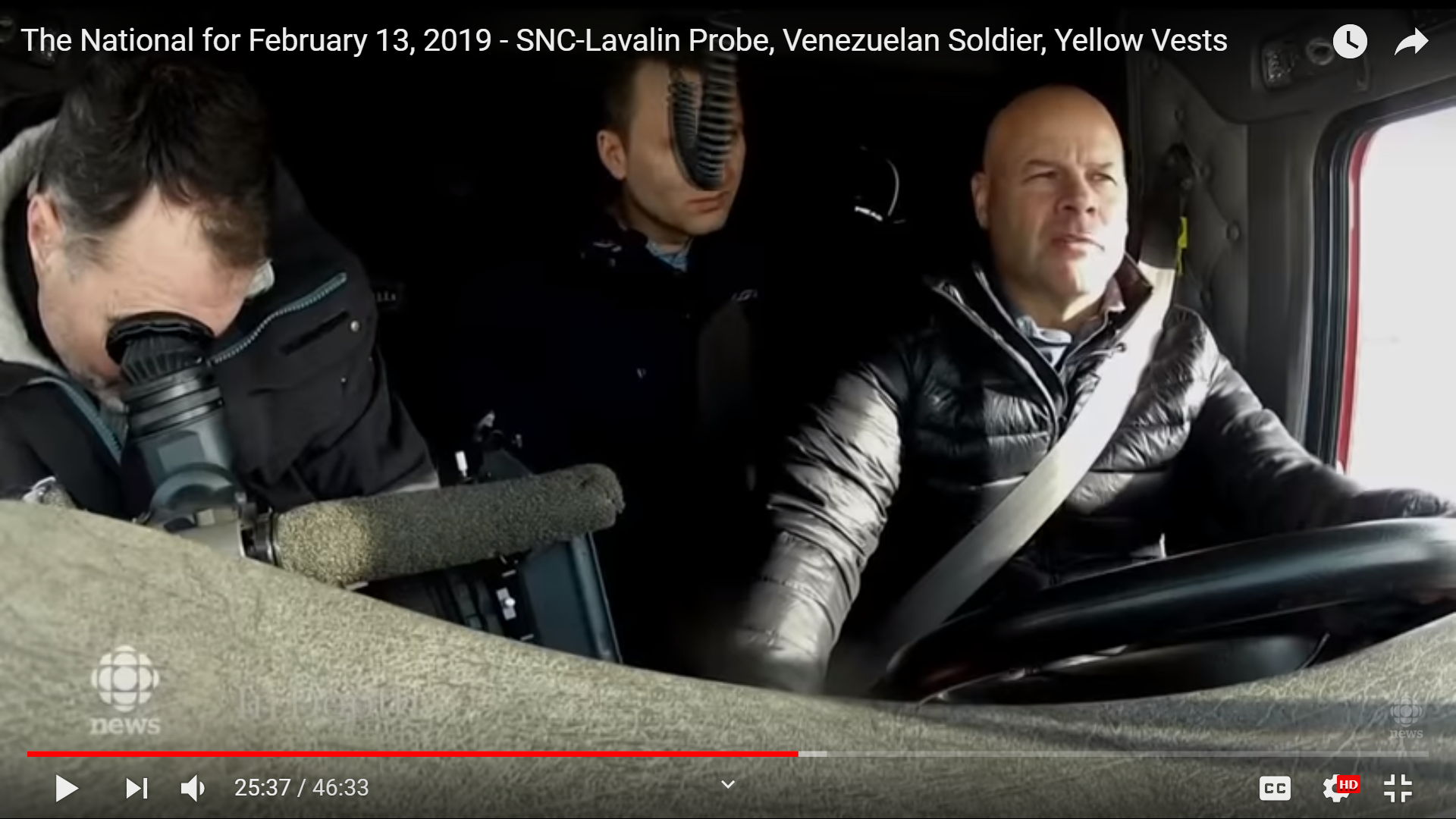 On February 13th, CBC’s The National ran with a story about the Yellow Vests Canada movement and their plans to bring a convoy of trucks to Ottawa.

The CBC misrepresents the group as primarily being driven by legitimate economic concerns and omits the worst examples of the hatred and threats that have come to characterize the Yellow Vests Canada movement. The end result is an sympathetic take on a movement characterized as a public safety threat in a briefing note authored by the Canadian Association for Security & Intelligence Studies – Vancouver.

Reporting on hate movements and hate groups is difficult. Hate groups tend to misrepresent themselves and it requires either deep research and observation of their less public-facing spaces, and/or building on the work of organizations like Anti-Racist Canada or Yellow Vests Canada Exposed and using information that's been collected over months and years of monitoring. Yellow Vests Canada Exposed says a producer from The National "interviewed one of our admins for 40 minutes, and didn't use any of it."

"Four months after yellow vest demonstrators hit the streets of France over taxes and the high cost of living, similar movements have popped up around the world."

Unlike the French Yellow Vests movement, the Yellow Vests movement in Canada has been entirely co-opted by the far-right. Left-leaning individuals aren’t welcome and almost every anti-Muslim extremist group has found a home in the movement. According to CTV News, “Canada's ambassador to France says this country's yellow-vest protest movement bears little resemblance to the ‘gilets jaunes’ who started it all in France . . . the movement in Canada appears to have been appropriated by far-right extremists espousing racist, anti-immigrant views and even indulging in death threats against Prime Minister Justin Trudeau."

“They're focused on the federal government's response to suffering in the oil industry tomorrow a convoy of trucks will drive that message all the way to Ottawa but they aren't the only ones laying claim to those yellow vests. Others want to spread a much different message, less about jobs, more about immigration.” CBC represents them, and allows them to represent themselves, as primarily focused on economic and oil issues throughout the story.

The majority of posts on the Yellow Vests Canada Facebook page are anti-Muslim, anti-UN, anti-immigrant, anti-Trudeau, and deal in conspiracy theories, such as the belief that Muslims are responsible for the Fort McMurray wildfire. There are hundreds of examples of overt racism and documented death threats. Relatively few posts are, in fact, about the oil industry.

The Clann and Canadian Combat Coalition (C3) are alt-right groups.

While alt-right has been used as a term in the United States to refer to a large coalition of groups, here in Canada there are two distinct hate movements with limited overlap: the anti-Muslim and alt-right neo-Nazi movements. The Clann and C3 are anti-Muslim groups, not alt-right groups.

Update: We received screenshots showing at least one member of the Clann to be an alt-right type.

“[The Clann has a] provocative message about Islam.”

The Clann is not only critical of the religion, but of Muslim Canadians. For example,  the Clann Canada (@ClannOntario on Twitter) liked a tweet two days ago reading “Muslims r not special. I think they r dirty/gross &violent. That is MY opinion. If they come to my place of work. I will be respectful &help them cause it my JOB. Doesn’t mean I like u or want u here. Just like I can feel the hate and disgust flowing from their men. #GTFO” 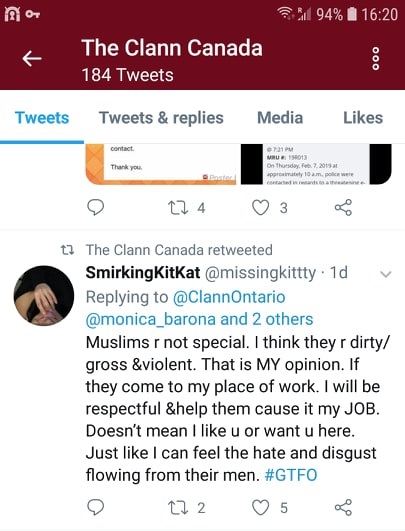 “More than a hundred thousand members see messages like this targeting Trudeau the media immigration and refugees.” CBC displays a few of the more benign, but still hateful, images.

Yellow Vests Canada Exposed, the Canadian Anti-Hate Network, and Anti-Racist Canada have documented hundreds of examples of overt racism, mostly directed at Muslims, and death threats towards Muslim Canadians and the Prime Minister. None of these death threats have been referenced in the story.

“The site was founded by Tyler Malenfant, since exposed for supporting racist rhetoric in the past.”

He wasn’t exposed as supporting racist rhetoric, but posting antisemitic comments, such as "Show me the 'evils' of the white man and I'll show you yet another Jewish lie."

...and has the support of the alt-right neo-Nazi movement:

The first rally in Toronto was led by Faith Goldy, a self-proclaimed propagandist for the alt-right neo-Nazi movement, and she is promoting the convoy. Other Canadian alt-right neo-Nazi accounts have tweeted in support of the movement on Twitter.