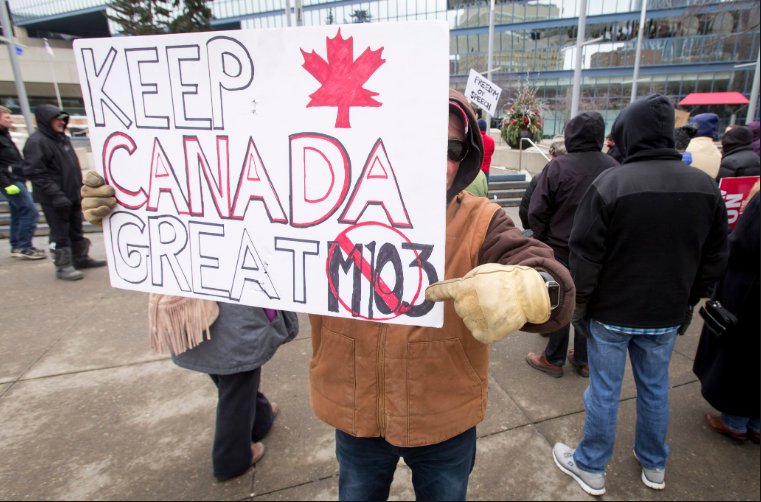 M103, the motion against Islamophobia, was a lightning rod for an anti-Muslim

street movement that firmly established itself in 2017. Source: Twitter.

To us in the field, these statistics are an indication of something we already know and can be a way to share that knowledge with the public. Hate groups and dogwhistle politics have further normalized racist and hateful attitudes that create an increase in everyday bigotry, overt hate, and violence towards our neighbours. However, we know the bad data underestimates the size of the problem.

According to research by Dr. Barbara Perry and Sabreena Ghaffar-Siddiqui, two of Canada's leading researchers on hate crime, there are systemic issues in how these numbers are collected and reported by law enforcement.

Over two thirds of victims of hate crimes don’t report to police. In some communities – and particularly among newer migrants – this number can be as high as 85 per cent.

Those that do report to police are sometimes discouraged from filing a report - in examples we've heard, either because it's not criminal (a hate incident) or because the officer doesn't believe they will be able to find the perpetrator and suggests to the victim that reporting is a waste of time. If the responding officer takes their report, the officer has to have to have the training to recognize an incident as a hate crime and tick a box on a form. In some jurisdictions, there will be another level of review which may remove the hate crime designation if there isn’t sufficient evidence (note: not disproving the incident, but not having the evidence to state it as fact either).

The cases that remain are stuck in limbo. If there is sufficient evidence to indicate the incident occurred and to move forward with an investigation, that case will be reflected in the numbers law enforcement pass to Statistics Canada. If the investigation isn’t going anywhere, it may not be included in the numbers. This process isn’t the same in every jurisdiction and the patchwork nature of hate crime training and reporting is another issue.

The result? Only a tiny proportion of hate crimes are reflected in the police reported statistics.

Then there are the issues of classification. For example, there are multiple categories an anti-Muslim hate crime can be coded as – racially based (eg. Arab) or based on religion (eg. Muslim). The system forces officers to make very subjective judgement calls - for example, race or religion, pick one - but bigots and racists often don’t draw these distinctions. In the United States, a Sikh man was killed in ‘retaliation’ shortly after 9/11. Often, brown skin is enough. Or consider this example – a swastika is scrawled over a poster of a woman in hijab. How should that be coded? Antisemitic, anti-woman (part of the 'other motivation' category), anti-Arab, anti-Muslim, or all of the above?

Since newer immigrant communities are less likely to report, and classification difficulties dilute the statistics further for groups and people with intersectional identities, some communities – like the Muslim community - are very likely underrepresented in the statistics.

We have a much better tool – in 2014 Statistics Canada did a survey on victimization as part of the General Social Survey. This self-report has its own methodological flaws but it’s the best tool we have, and suggests far higher levels of hate crimes across Canada.

That survey is scheduled to be repeated for release in 2019.

We need an audit and standardization of police-reported hate crimes. However, there is a more immediate solution. If we want a better measure of hate crimes in Canada, Statistics Canada should add additional questions and do the victimization survey every year.