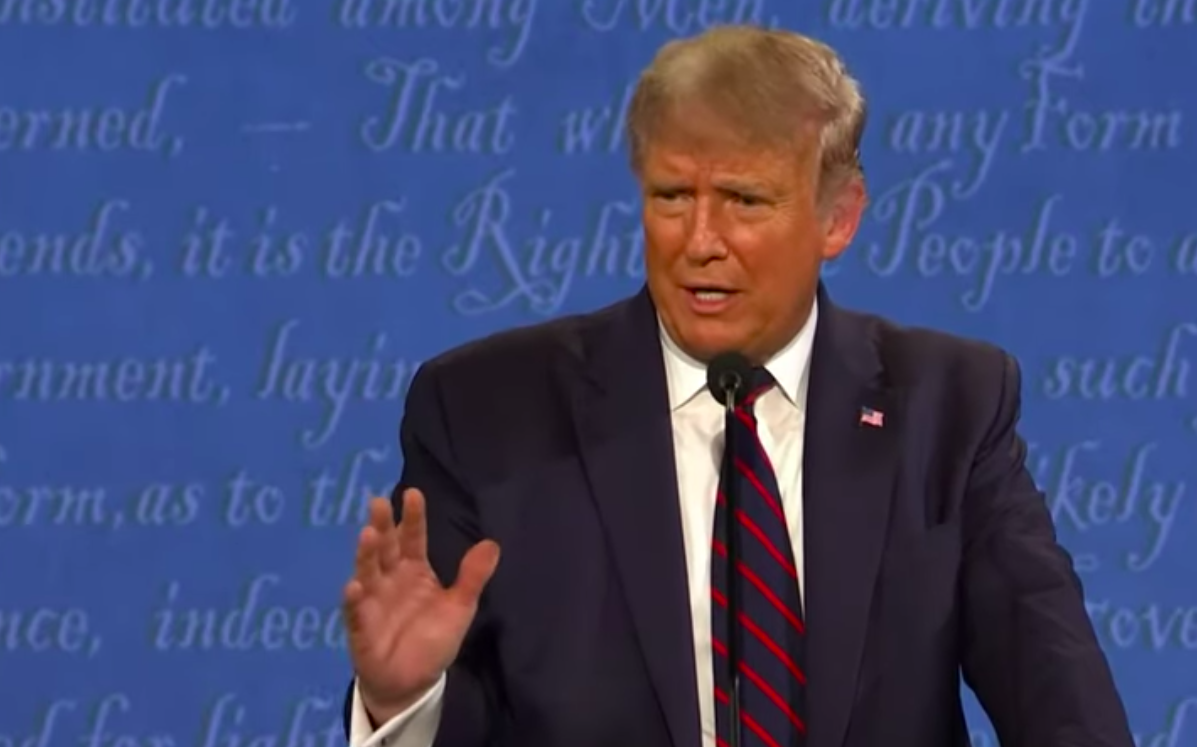 Words spoken by President Donald Trump defending the Proud Boys are being hailed by white supremacy and fascists in their private spaces on both sides of the border as a win, potentially emboldening them further.

Donald Trump was asked directly to condemn white supremacy by the debate moderator. He refused.

“I would say almost everything I see is from the left-wing not from the right-wing,” Trump started, eventually adding, “Proud Boys, stand back and stand by. But I’ll tell you what somebody’s got to do something about Antifa and the left because this is not a right-wing problem this is a left-wing...”

The message fell well short of condemnation for many, including the Proud Boys, who hailed it as a victory almost immediately.

“Trump basically said to go fuck them up,” member Joe Biggs wrote on his. 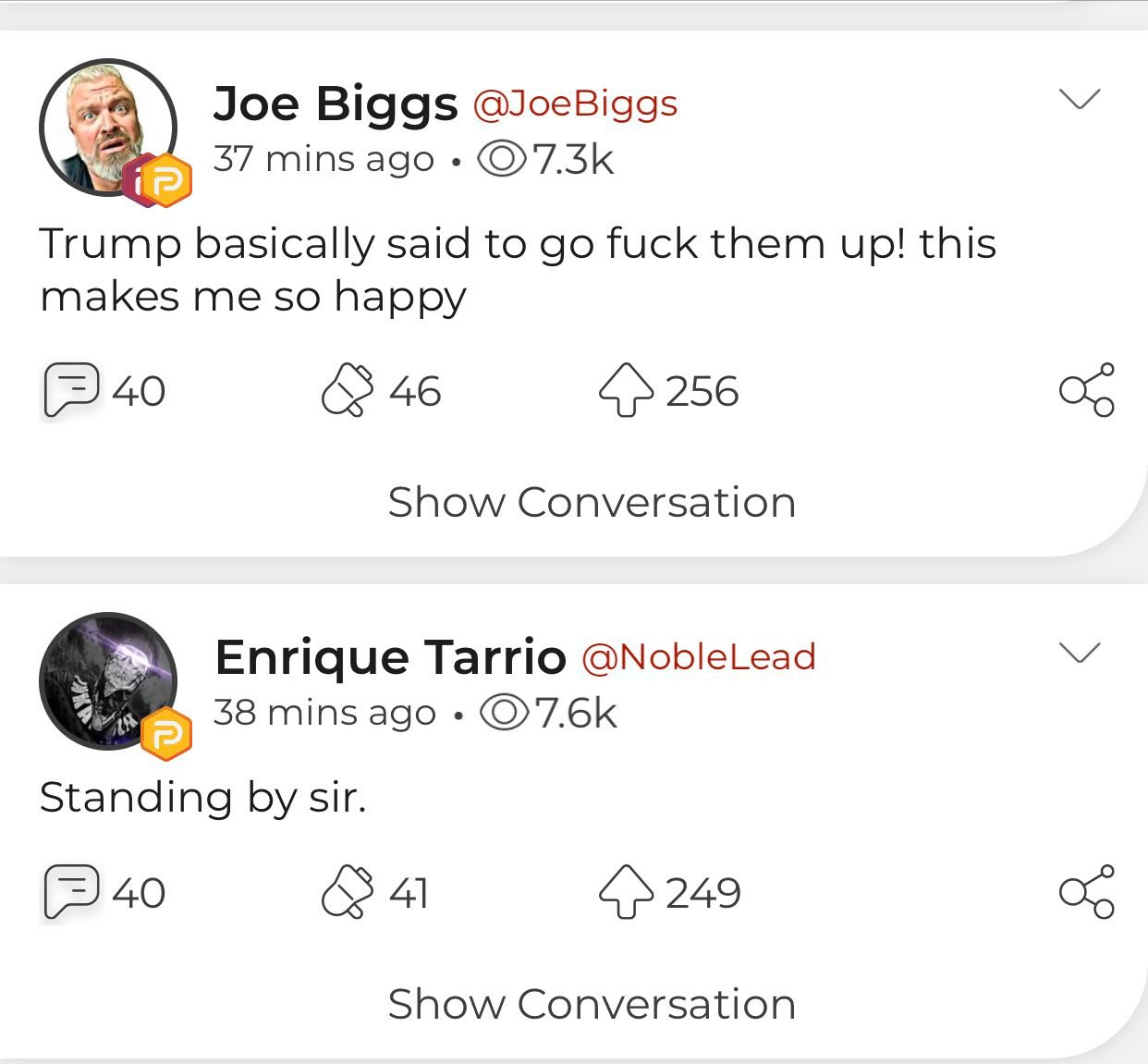 Canadian members have also joined in voicing their support on Parler, while on Telegram, the explicitly fascist Proud Boys Canada First discussion group has drawn several new accounts to the chat since the debate, with one mentioning the debate in particular.

“I knew nothing about Proud Boys tonight until the media started calling them a white supremacist group,” the new addition chimed in.

Canadian Proud Boys have recently appeared alongside anti-mask protests in Manitoba, with one wearing a T-shirt bearing the QAnon slogan “Free The Children.”

It didn’t take long before the Proud Boys had added Trump's quote to their logo - and started selling t-shirts with the new design. 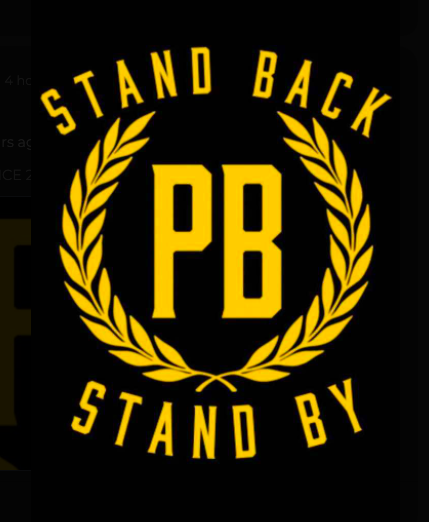 On more explicitly fascist pages, despite criticism that Trump is soft on Israel, many accounts are instead pointing to Christopher Wallace’s Jewish heritage and accusing him of debating for Biden. Others have clipped Trump’s face over music and apocalyptic imagery, literally having him dance over a burning country. As accelerationists, they hope for a societal collapse leading to a race war - which they win - and deportations and genocide once they take power.

The QAnon conspiracy sphere was busy posting about hackers attempting to break into Joe Biden’s alleged earpiece. Instead of focusing on the president’s comments about race, they posted a clip of the former vice president for echoing the words of Trump’s FBI director when he said that Antifa is an ideology rather than an organization. 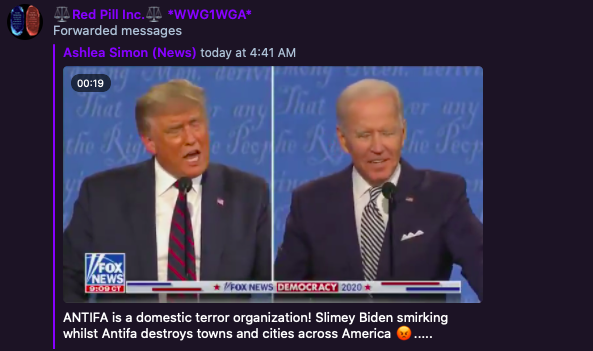 People who follow the online postings of the infamous and unknown conspiracy theory prophet QAnon, or just Q, believe that Trump is central to defeating the cabal, a shadowy group of ultra-powerful politicians, businessmen, and celebrities that abduct children for pedophilic and cannibalistic ends.

The Proud Boys have been designated a hate group by the SPLC and have become known for provoking and carrying out violence when attending protests and speaking events. The PBs were started by Canadian, Vice Magazine co-founder, and former Rebel Media personality Gavin McInnes. Despite their constant denial of being a misogynistic, racist, and otherwise hateful group, both members and its founder have been heard regularly engaging in hate speech, especially against trans persons. Over time they have become more explicitly fascist, especially in Canada where several prominent members share antisemitism and neo-Nazi memes.

Only a tiny minority of people make it to the bottom of your average news article. Thanks for sticking with us!

If you like our work, maybe make a donation? antihate.ca/donate.