This was posted more than 12 months ago. The information may be outdated.

Yellow Vests Canada convoy (aka United We Roll) about to arrive in Sault Ste. Marie 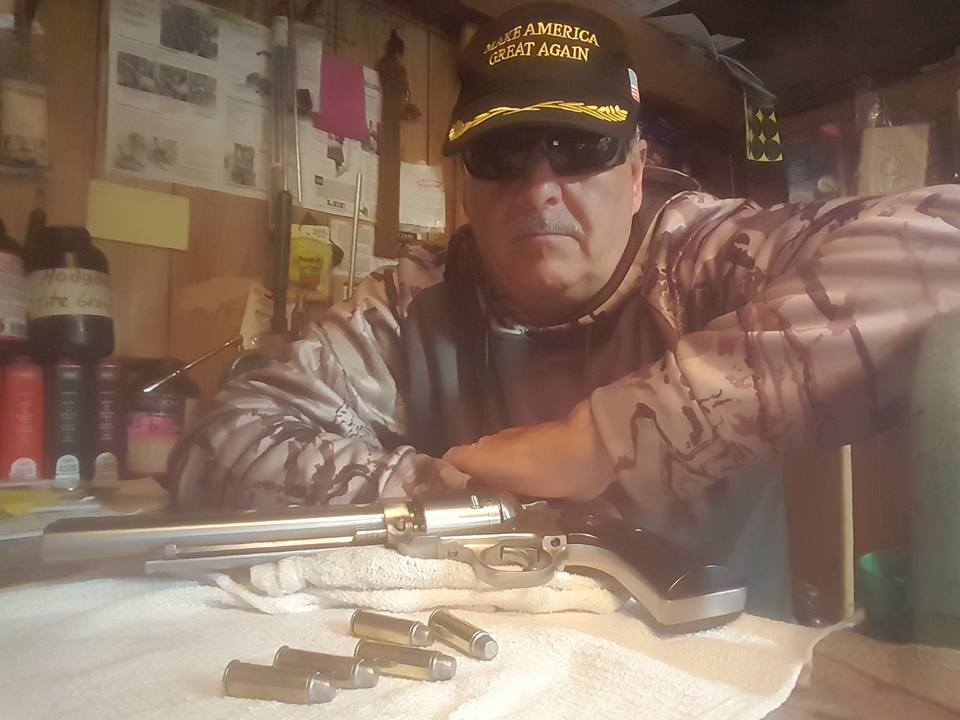 Content warning: Selvers’ blog posts are not censored in the body of the article.

According to Sault This Week, Dave Selvers started organizing Yellow Vest demonstrations in Sault Ste. Marie in mid-December, bringing together a half dozen others for Saturday protests. He supports the Yellow Vests Convoy (aka United We Roll) and is telling supporters when and where to meet the convoy later today. He is an active member of the Yellow Vests Rebellion Facebook group, a Canadian Yellow Vests Movement page which has 18,000 members and shares a moderator with the United We Roll! Official Convoy For Canada! Facebook group. 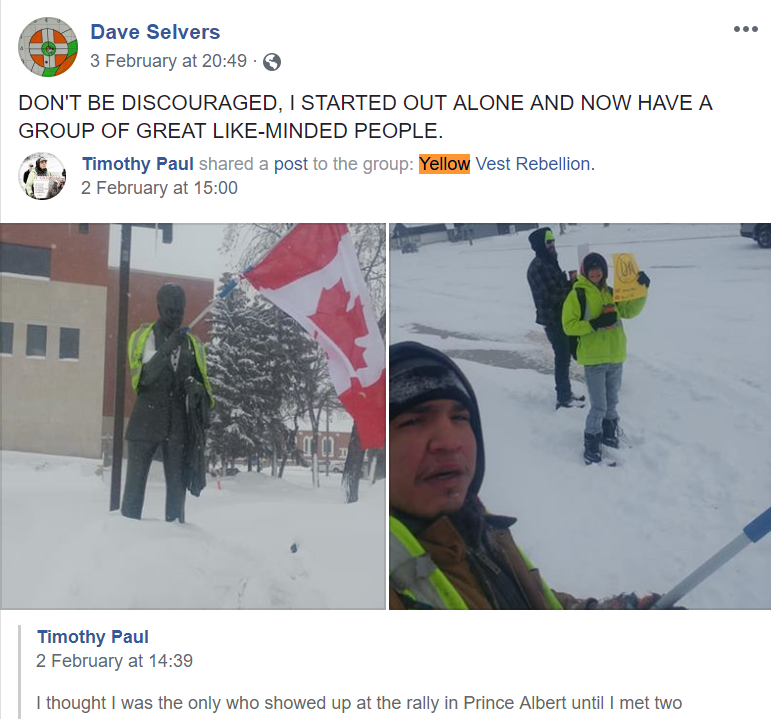 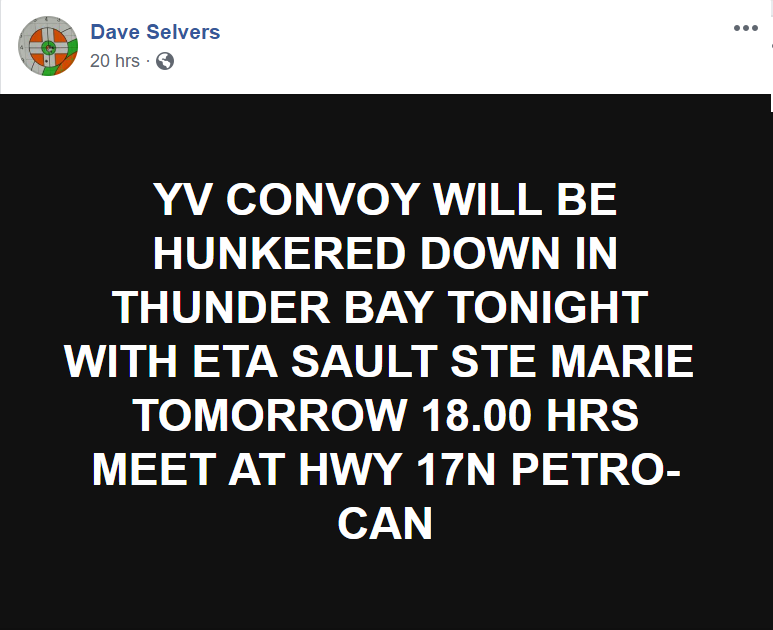 In 2017, Selvers was part of an anti-M103 demonstration organized by the Canadian Coalition of Concerned Citizens, an anti-Muslim group. M103 is the government’s motion condemning Islamophobia, that acted as a lightning rod for a fledgling street-level anti-Muslim movement that today is part of the Yellow Vests Canada movement.

Selvers, who has been blogging since at least 2011, targets Muslims, Blacks, women, LGBTQ+ persons and others. He has called for Trudeau, those close to him, and Obama to be hanged.

Update 2019-02-18: A picture uploaded to Selvers' Facebook profile indicates he (or at least one of his branded vehicles) attended the United We Roll convoy meetup in Sault Ste. Marie. Selvers is the President of Millenium Crane Rental Ltd. 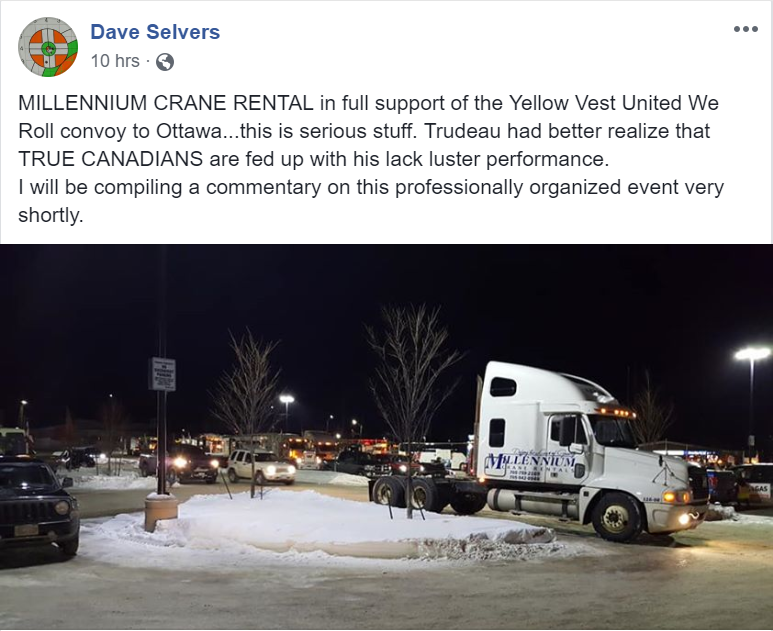 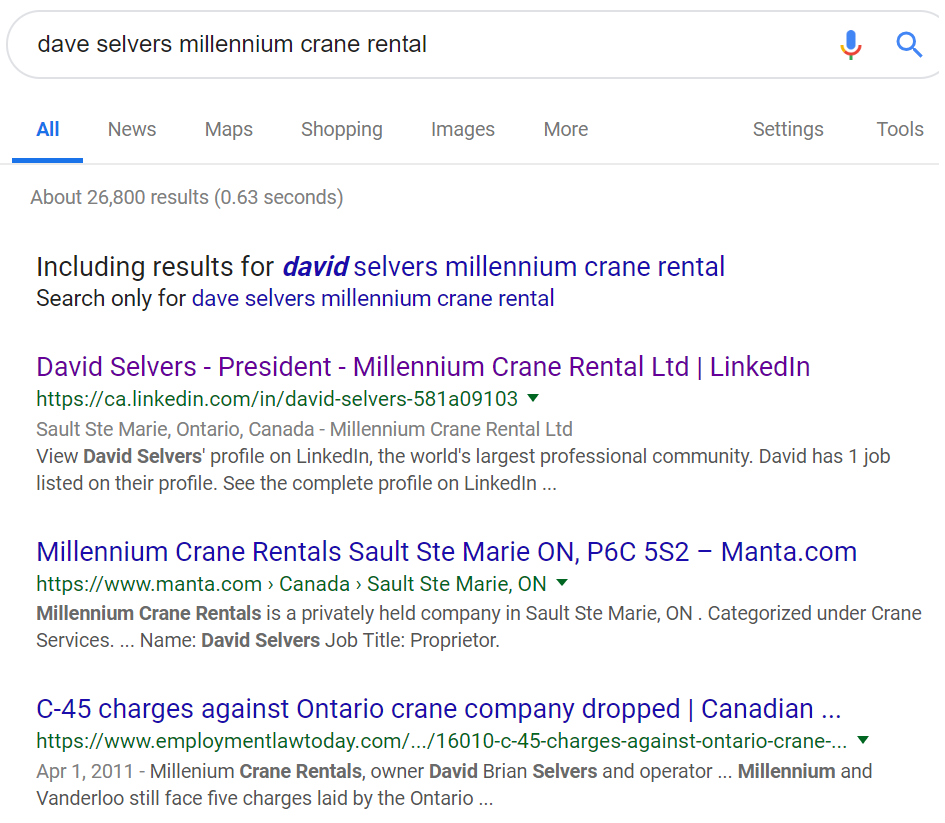 “thanks for the post of your support for our yellow vest movement. I spoke with the media this morning and was told that they are getting a lot of phone calls from people who want to join in and were requesting my phone number...they asked permission to give out my number and I told them yes.

I'm fighting for the re-instituting of the cultural norms and the Conservative values that Canada once shared so closely with America prior to 1970...I'm fighting against the MARXIST IDEOLOGY that the NWO has polluted our country and our minds with and used subversive dupes, like PIERRE ELLIOT TRUDEAU and his TWERP SON JUSTIN TRUDEAU, to propagate the MARXIST SOCIALIST AGENDA.

“NO WOMEN IN POLITICS

Not too many women have qualified for the position of leadership and authority. Those women who have are along the lines of Joan of Arc, Queen Boudica, Margaret Thatcher, Benazir Bhutto and maybe one or two more. The fact is that none of these female character types exist today

Women do not belong in politics, at least not today's women. I cringe whenever I hear the filthy drivel and incoherent musings of imbicilic wenches like Nancy Pelosi, Maxine Waters, Barbara Boxer, Elizabeth Warren, Hillary Clinton, and so many more in the political world. Even in media. So many female journalists are indoctrinated into the MARXIST IDEOLOGY and they're ultimately sickening to listen to...as are their predominantly queer male counterparts.”

“FAGGOTS, QUEERS, LGBTQ CIRCUS FREAKS and a prime minister who's the illegitimate son of a psychotic circus whore ( who was no doubt banging Fidel Castro and his communist comrades ) have destroyed this once great country....we are overrun with muslim terrorists, our landfills are overburdened with Chinese trash, our educational system is an indoctrination camp for progressive marxism ( aka liberalism ) and the demented fruitcake who thinks he's prime minister is nothing more than a FAGGOT TWERP and " USEFUL IDIOT " for George Soros, the UN and the " CLUB OF ROME " .”

“TRUDEAU MUST BE ARRESTED AND TRIED IMMEDIATELY FOR TREASON AND UPON BEING FOUND GUILTY EXECUTED....I DESPISE THIS FAGGOT TWERP AS MUCH AS I DO THAT BLACK MUSLIM NIGGER TERRORIST OBAMA, BOTH ARE OF THE SAME RETARDED MIND

CANADA'S LIBERAL GOVERNMENT IS COMMITTED TO KILLING OFF THE WHITE PEOPLE WHO BUILT THIS COUNTRY, LIBERALS ARE THE ENEMY."

“ALL OF THIS COULD BE FIXED TOMORROW IF SOMEONE IN THE MILITARY WAKES UP AND REMOVES trudeau AND HIS FILTHY LIBERAL PARTY FROM OTTAWA. DRAG HIM OUT INTO THE STREET AND PUBLICLY HANG HIM FOR TREASON , AND THOSE CLOSEST TO HIM....OR WE'LL HAVE A CIVIL WAR ON OUR HANDS THE LIKES OF WHICH HAS NEVER BEEN SEEN ON THE NORTH AMERICA CONTINENT.”

With files from a supporter in Sault Ste. Marie. Thank you for the information.

“Well, all the feminist [sic] I know are gonna die soon. There’s about to be a major culling in this city. The only good feminist is a dead feminist.”

A regular fixture at protests against public health measures, Police On Guard For Thee and Constable Chris Vandenbos seem to have few qualms about sharing the stage with antisemites and conspiracy theorists willing to help share their message.