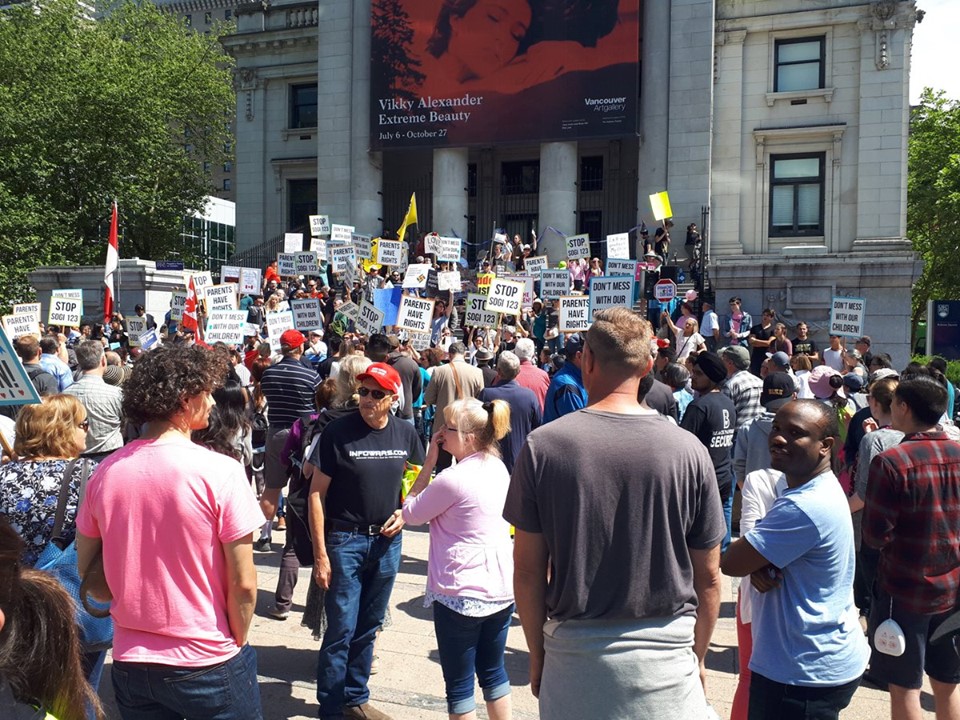 Anti-trans demonstrators gather in front of the Vancouver Art Gallery on June 15th.

2019-08-02 update: The assault charges against the member of the LGBTQ+ community, referenced below, have been dropped.

Three people were detained by the RCMP, and one is reportedly being charged with assault, after protesting an anti-trans event at the University of British Columbia (UBC) on June 23rd. The talk featured Okanagan resident Jenn Smith, who refers to himself as a “transgender-identified male.”

UBC’s Vancouver campus was the latest stop in Smith’s speaking tour of the Lower Mainland and Vancouver Island. Smith weaponizes his asserted identity in trying to undermine trans rights, including sexual orientation and gender identity (SOGI) education in schools.

A video shared on Facebook shows a young woman, who identifies as queer, stand up and run towards the exit at the back of the room after someone outside pulls the fire alarm. She swings her arm as she rounds a corner at the back of the auditorium, and the Pride flag she is holding may come into contact with the head of a man, who ducks. Smith can then be heard screaming from the front of the room, “That is assault! Detain her!” The RCMP then detain the young woman.

Based on what is shown in the video [audio warning: the video is quite loud], Students Against Bigotry believes the assault charge against the protester is without merit. Furthermore, we believe she would not be facing charges were it not for Smith insisting it was assault.

The two others detained are both hijra, a non-binary identity recognized in South Asia. They can be seen in the same video sitting on the floor at the front of the room, then calmly being escorted out by police officers.

A trans person against trans rights?

Sponsored by the Canadian Christian Lobby, Smith is an anti-trans activist who denies the validity and lived reality of transgender people. He spreads misinformation and fear about transgender people as predators harming women and children, claiming that SOGI education is “brainwashing.”

This flies in the face of established research which shows that this inclusive programming reduces bullying and suicides, not just among LGBTQ2S+ youth but among all children. It is difficult to reconcile Smith’s apparent concern for kids with his position against policies that have been proven to save the lives of young people.

Smith pathologizes transgender people by alleging that mental illness is responsible for their gender identity. He describes his own as "impulses" that "came out of his childhood traumas and a sense of rejection."

Furthermore, he only acknowledges male and female identities, another anti-scientific view which erases not just intersex and non-binary people, but also Indigenous Two Spirit people, recognized by the Musqueam nation on whose stolen and occupied land this talk took place.

“We must at all times remain tethered to physical reality, and the physical reality in this case is that men cannot be women (and vice versa), no matter how much they pretty themselves up.

They can live and express any way they want,  but they cannot force others to surrender physical reality, because that is selfish and dangerous to both women and children, and increasingly towards freedom itself.”

In addition, Smith has links to the Soldiers of Odin, a violent anti-Muslim hate group, which he has used as bodyguards for past events. In attendance at the UBC event was Vancouver neo-Nazi Brian Ruhe, as well as at least two individuals wearing People’s Party of Canada hats — further examples of Smith’s far-right support.

A few days before the talk, the UBC Faculty Association issued an open letter to the university’s Board of Governors urging them to cancel the event. Similarly, the Association of Administrative and Professional Staff (AAPS), the largest employee group at UBC representing nearly 5,000 staff members, stated in no uncertain terms in its own letter that hosting such an event on campus “risk[s] physical injury to the students, staff, and faculty of the University.”

This risk was made apparent when one event attendee, Donald Smith, filmed himself taunting and threatening queer protesters and allies with gendered profanities, and bragging that he knows where they live. “Come to Edmonton,” he can be heard saying in the video. “We'll show you how we do it down there. We hold baseball bats!"

According to UBC policy, the university “reserves the right to ensure that any use of Bookable Space does not compromise UBC’s or the UBC community’s activities, as well as the safety and security of persons and facilities.” But president Santa J. Ono apparently feels that hosting events of this nature does not compromise the community’s safety and security, or undermine the university’s research on transgender health or SOGI.

Administrators felt differently at Douglas College and Trinity Western University, which cancelled bookings by Jenn Smith once they became aware of the nature of the events, which they claim was not initially clear in the booking request.

Community responds with love and support

Smith is just the latest in a growing series of hateful and discriminatory individuals UBC has platformed with speaking engagements under the guise of “free speech.” In the past year alone, the university has also welcomed Jordan Peterson, Meghan Murphy, Ricardo Duchesne, and Ben Shapiro.

Lauren Southern and Stefan Molyneux were also scheduled to appear at UBC this past March, but efforts by Students Against Bigotry, the Canadian Anti-Hate Network, and other groups forced them to relocate their event, then cancel it altogether

On Sunday, at a fountain near the building where Smith was speaking, about 50 people responded by gathering for a rally in support of the transgender community and their loved ones. The rally was organized by BC Families for Inclusivity (BCFFI) and included students, faculty, staff, and other community members.

BCFFI’s Brad Dirks gave a heartfelt speech about the harassment his family has faced from people like Smith. Last year, Dirks gave a TEDx Talk titled “My Journey as the Proud Parent of a Transgender Son.”

“You wouldn't speak to a neo-Nazi to obtain credible information about the Holocaust,” Dirks told a crowd that included other parents and their children. “So please treat your transgender friends, family, students, co-workers, and neighbours with the same respect . . . Stop obtaining information from transphobic bigots who spread lies and misinformation about our transgender loved ones.”

Another speaker, one of the people later detained, expressed her outrage and frustration that UBC administrators and president Santa J. Ono continue to allow far-right speakers to spew hate on campus.

The crowd then marched to the building where Smith was speaking, carrying balloons, banners, and flags. Slogans being chanted included “Protect trans kids,” “Save our kids from suicide,” and “Trans rights are human rights!” While some of the people with the rally entered the building and purchased tickets to attend Smith’s talk, most of the group continued to make noise outside.

The mood among the protesters was one of defiance and solidarity throughout the evening, in spite of attempted provocations by event attendees like Donald Smith.

No more hate speech at UBC!

This year’s Pride Month has been a difficult one for the LGBTQ2S+ community, which continues to be disproportionately targeted by violence. Recent confrontations at marches in Detroit, Hamilton, and Toronto again call the role of the police into question.

Just one week before the UBC event, Soldiers of Odin were present at an anti-trans rally at the Vancouver Art Gallery alongside members of the People’s Party of Canada and the neo-Nazi Ruhe.

Students Against Bigotry stands in complete and unwavering solidarity with all those targeted by hate speech, and all who oppose it alongside us — including the young woman protesting anti-trans hate and now facing what we believe to be an unjustified assault charge. We await the announcement of her court date, and we intend to be there to support her.

Students Against Bigotry is a grassroots student organization working to build community solidarity in opposition to hate speech at the University of British Columbia and beyond.

Editors note: The opinions expressed in this publication are those of the authors and do not necessarily reflect the views or opinion of the Canadian Anti-Hate Network.