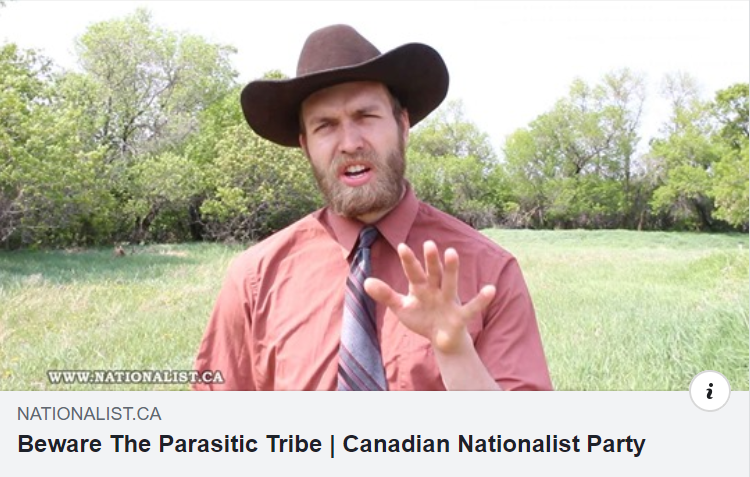 In June 2019, the Canadian Anti-Hate Network filed a criminal complaint with the RCMP in Saskatchewan for an antisemitic video posted by Travis Patron, leader of the neo-Nazi Canadian Nationalist Party. The RCMP says they launched an investigation. A full year later the RCMP has not made any further statement on the status of that investigation, despite Patron escalating his antisemitic calls to arms. It’s turning into international news.

Given the most recent incidents, CAHN board member Richard Warman filed a renewed criminal complaint with the RCMP and CIJA and the Friends of Simon Wiesenthal Center followed suit, filing their own complaints.

If you support our work against the neo-Nazi Canadian Nationalist Party, help us out at antihate.ca/donate. Thank you!

The video that prompted our June 2019 complaint deals in antisemitic tropes, calls Jews a “parasitic tribe,” and says they need to be dealt with once and for all; any reasonable person would understand the video as a call for deportations and genocide.

At the time Patron claimed it wasn't about Jews:

“Unless you self-identify with the accusations in the video, then it doesn’t concern you. But if you choose to be offended by it, ask yourself WHY? Is it wrong for Canada to rid itself of a parasitic relationship that has only served to suck us dry? #Zionism #cdnpoli”

Patron has a social media history of supporting “historical revisionism,” a term Holocaust deniers use to self-identity, liking posts quoting Hitler, and promoting the writings of Quebec fascist Adrian Arcand, a Hitler supporter who was arrested and interned during WWII.

Despite his barely veiled neo-Nazism, our promise to name their members should they not renounce their support, and the pending investigation, Patron’s Canadian Nationalist Party was ultimately recognized as a federal political party with all the inherent benefits in time for the 2019 election. Unsurprisingly, Patron and his two candidates received almost no votes.

In November 2019, Patron was charged with aggravated assault and assault causing bodily harm for allegedly attacking two women who wouldn’t get in his car. Those charges are pending.

Since then Patron has made nonsense arguments that he isn’t subject to Canadian law and dispensed with any pretense that he isn’t targeting Canadian Jews. He has posted a video giving a Nazi salute, which he calls a Roman salute, and published a flyer with the transcript of the first antisemitic video, adding:

“The people we speak of are not truly 'Jews.' They are liars and deceivers attempting to shield themselves from criticism using a false identity. Let us be aware and expose them for what they are: a tribe of parasites.”

Patron has since made other videos in the same vein, and is also dealing biblical antisemitism, including sharing an infamous bible passage saying Jews are of the “synagogue of Satan.”

CAHN believes the evidence is more than sufficient for the RCMP to criminally charge Patron with the wilful promotion of hatred against the Jewish community who have every right to be protected from Patron and the poison of his hate propaganda.

It’s been over a year since the first criminal complaint. How much longer do we have to wait?